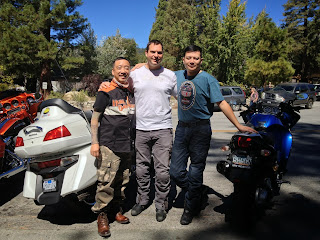 Rise up this mornin',
Smiled with the risin' sun,
Three little birds
Pitch by my doorstep
Singin' sweet songs
Of melodies pure and true,
Sayin', "This is my message to you-ou-ou:"
Singin': "Don't worry about a thing, worry about a thing,
oh! Every little thing gonna be all right.

Words and Pictures by Jim Foreman 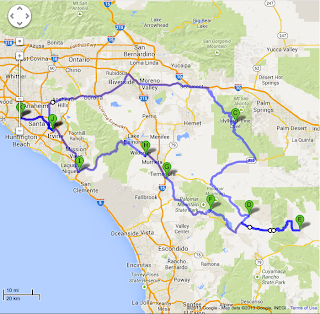 Destinations: Idyllwild via CA 243, Borrego Springs and Palomar Mountain.
Total Miles: 353
Best time to go: Year Round (Except for Snow or Ice)
Difference in Temperatures: 40ºF (92º in Beaumont 62º at Palomar Mountain)
Participants: Pan Huang, Hanson Xie and Jim Foreman
Fun Factor: Off The Hook!
Passenger Fun Factor: Same as Above
Lunch Enjoyed at: Gastrognome
Miles Visable from the Top of Palomar Mountain: 75+
Number of Cops Seen All Day: 2
Map of the Route: GoogleMaps


Every day one hears 'Epic' this and 'Epic' that and each time it's heard it becomes evident that it's not 'Epic' at all.  At best when the word 'Epic' is used it really means, mildly interesting.
That was not the case for the SoCal Triple Play that even included a bonus run.

Last week, a message was received from Hanson suggesting He, Pan and I go out for a ride over the weekend.  Last time around we went all the way through Angeles Crest Highway and had a great time.

It was agreed to all meet at Pan's home in Tustin near the old Marine Corps Air Station.  We donned our gear, mounted up and headed out for a day of fun.  As is often the case, the weather in SoCal was spectacular.  Truly, one couldn't wish for better weather.  Clear, sunny, not too hot, just perfect weather.

When the destinations tend to lead far away from home, getting the Interstate travel out of the way early on has proved an efficient strategy.  Just like with Ojai, we decided to burn the interstate to CA 243 (Palms to Pines Scenic Byway).  That way, we would be heading, gradually, back toward home, on a day trip.  This course also allows us to warm up our bikes and ourselves before hitting the awesomeness.

Upon reaching the CA 243 exit off of I-10, we rolled up to the base of the mountain.  This is the point we mounted the GoPRO Cameras and really started our journey.

If one has traveled CA-243, then the next few sentences will be old news.  If you haven't had a chance, to make the run to Idyllwild, why the heck not?
This road must have been designed by motorcyclists.  It's really that amazing!  The corners will cause your cheeks to hurt from smiling in your helmet too much.   The scenery and sights will be a visual feast for your eyes.  Going up the first part, it's impossible not to notice and smell the remnants of the recent fire.  After the first summit, all the fire damage is in the past.  What's left is mile after mile of shady, cool, pine-scented roadway that simply beckons you to open the throttle just a little bit more.

Along the glorious 24 miles between the base of the mountain and Idyllwild, there is just one area where the speed limit drops.  It's only a brief slowdown and then normal speed to Idyllwild.  Idyllwild is a great stopping point.  This rustic village is known for being exceptionally motorcycle friendly.  There are three gas stations in town.  None of them are exorbitantly priced.


Dining options are aplenty in Idyllwild.  Many riders simply pull into Jo'anns Restaurant and Bar.  The unfortunate live rendition of Ella Fitzgerald's 'At Last' coming from their performance stage would upset even the most robust appetites.  I recommend trying a new place each time.  There are many European ex-pats living in the area.  Many offer some terrific culinary options.  We decided to enjoy 'Gastrognome Restaurant'.  After a delicious meal and attentive service, Hanson and Pan took a stroll around part of the town.  It was my job to setup the cameras again for the next leg of our journey.

A brief fill up at one of the gas stations, and we were off.  We continued south on Hwy 243.  It's a nice wind-down as the amazing twisties, elevation changes and scenery continue.  Upon reaching the 2000' level, a choice to continue on 243 south or head south/west on Hwy 74 is presented.  We continued south on the 243.
At Kenworthy Bautista Road (CA 371), we made a right and headed to Aguanga.  CA 371 dead-ends into Hwy 79, so a left turn was made onto Hwy 79 and the journey continued.

Up until this point the option of going to Borrego Springs was uncertain.  Given the relative early time in the afternoon, the decision was made to go for it.  A quick left turn was made on San Felipe Road (S2).  A Couple miles later, there's a 'Y' in the road.  San Felipe continues on the right,  but you will want to veer left onto Montezuma Valley Road (S22).  This is what leads into Borrego Springs.

Montezuma Valley Road (S22) is the second part of the three road triple play that made up this journey.

This road is a must for all serious motorcyclists.  The well cambered roadway matches perfectly with the speed and degree of the corner to bring about excitement and joy!

This time of year is butterfly season and the roadway was covered, in places, with butterflies.  As we would ride through, the road would seem to disintegrate and rise above the expected surface.  Think of a cool slo-mo scene in the Matrix to get the idea.  Though our bikes got a little peppered with butterfly guts it was surprisingly minimal give the tens of thousands we actually rode through.

At the bottom of the hill, Borrego Springs was a virtual ghost town.  Two thirds of the businesses were closed or vacant.  We couldn't even find a coffee shop to rest for a quick break.  A small market remained open.  We settled on some bottled Mocha Frappucinos for the three of us.  Given all the fun we've had, so far, one might think we were ready to call it a day.  No Way!  Pan and Hanson were ready for more!  I was too!  Off we went to ride Montezuma Valley Road, AGAIN!  It was even better going back since the recent run of the corners going down were still fresh in our memory.


We backtracked to the 79 and made a left.  A short way down the road is CA 76.  Turn right toward Lake Henshaw and made another quick right onto East Grade Road.  Be careful.  East Grade Road comes fast.  Look to the right because it's easy to miss.  After making the right, head up the hill toward Palomar Mountain and part three of the SoCal Trifecta.

East Grade Road and Palomar Mountain Road are a motorcyclists paradise.  Sadly most riders will follow the darned GPS Master and just roll along Hwy 76 without even a clue to the amazingness that they are missing just a few miles away.  If you don't have one already, get a Butler Motorcycle Map and study it.  Also turn off the GPS once in a while.  Remember, you ride to get away from being told what to do.

A short way up East Grade Road, there is an overlook with an impressive view of Henshaw Lake.  This is a great spot to get some 'Glamor' shots of your bike.

Continuing on along East Grade Road will bring cooler temperatures again and certainly challenge the lean angles of your bike.  The visuals are amazing and perfect for GoPRO footage.  As we reached the end of East Grade Road, several vistas became evident and should be stopped at for more glamor shots with you and your bike.

At the intersection of East Grade Road, Palomar Mountain Road and State Park Road is Mother's Kitchen.  Mother's Kitchen is very  motorcycle friendly.  It's also a great place to eat.


We stopped at a vista point overlooking San Diego County and Catalina Island in the distance.

From there we completed the "Pièce de Résistance".  Palomar Mountain Road is well known amongst serious sport riders.  Often you'll see them gathered at the base or the top of the hill making their runs.  Even at the late hour, there were still supersport riders readying for another run.  It's incredible going both uphill and downhill.  Conveniently, there is a fire station at the top of the run for the inevitable novice who tries to outride him or herself.  On weekends, it's quite common to hear sirens responding to incidents.  Please ride within your limits.

Any one of these roads is a great destination in itself.  All of us were fine doing a good distance and we really wanted to do a lot of riding.  While these roads are relatively close to each other there is no reason to rush it.  Especially with a passenger, it would be worthwhile to spend half a day in Idyllwild or explore Borrego Springs.  Palomar Mountain has a lot of side roads and a world-class observatory.

It was now 5:30pm and we had an hour of daylight left and a rather long way to go.  A right at the base of Palomar Mountain road brought us back onto Hwy 76.  This stretch is quite fun.   Expect to ride a fair distance, until the road split near the Pala Casino.  We stayed right onto Pala Mission Road.  A subsequent right onto Pala-Temecula Road came shortly.

Now it's not uncommon for some drivers, typically in hybrid powered cars, to go slow and not use the proper turnouts to let others pass.  These self-entitled, self-righteous, narcissistic drivers may not even realize that there is anyone else even on the road.  An even worse situation was encountered on this road.  The offending driver had a full-size late 90's Ford F-150 with a H-D Sticker, a License plate frame that says, "I'd rather be riding my Harley-Davidson" and a H-D logo trailer hitch cover.  One would think they might have a sense of others on the road.  Perhaps it's not too much to ask to drive the speed limit, not 10 MPH under.  We were clearly seen in his side and rear-view mirrors, yet turnout after turnout was passed without the slightest courtesy to pull-over.  We wound up aggressively passing the driver and while doing so I looked at him shaking my head.  All three of us later commented on what a jerk this guy was.

Pala-Temecula Road drops us off at CA 79.  There is a gas station there as well as an In-N-Out Burger and Starbucks along with other places to eat.  Once refreshed, we headed west on 79 and immediately jumped on Interstate 15 going north.  This was a bit frustrating as traffic was backing up and splitting lanes, approaching dusk, for 30 or so miles was not appealing.  A proverbial lightbulb flashed bright in my head.  We exited a few miles later at Clinton Keith Road and made a Left. 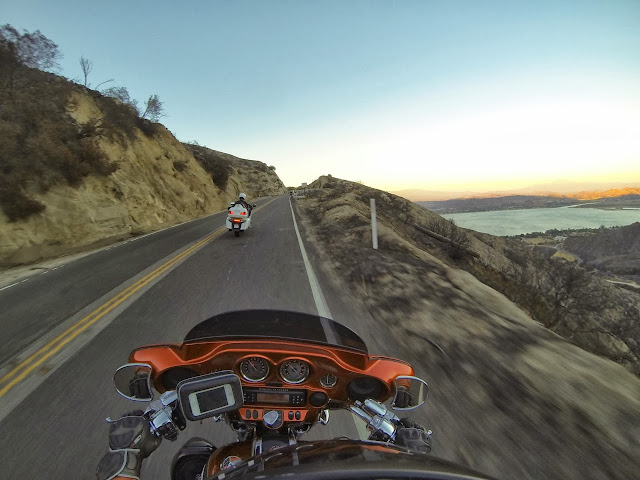 We weren't planning on hitting Ortega, but the traffic on the 15 and likely traffic on the 91 made this choice very appealing.  We made the left onto Ortega and never looked back.

As we reached the lookout, the opening salvos of dusk were fast approaching.  Fortunately traffic was quite light.  We were able to keep a hastened pace.

Only a short 15 minutes of night riding was required up Interstate 5 to Tustin and to return to Pan's residence.

From there we all thanked each other, talked about how much we loved today's ride and when we would plan another one.

A sudden rush of gratitude was upon me as I realized how many good friends I have to share these motorcycle adventures.