The Secret About Ojai! 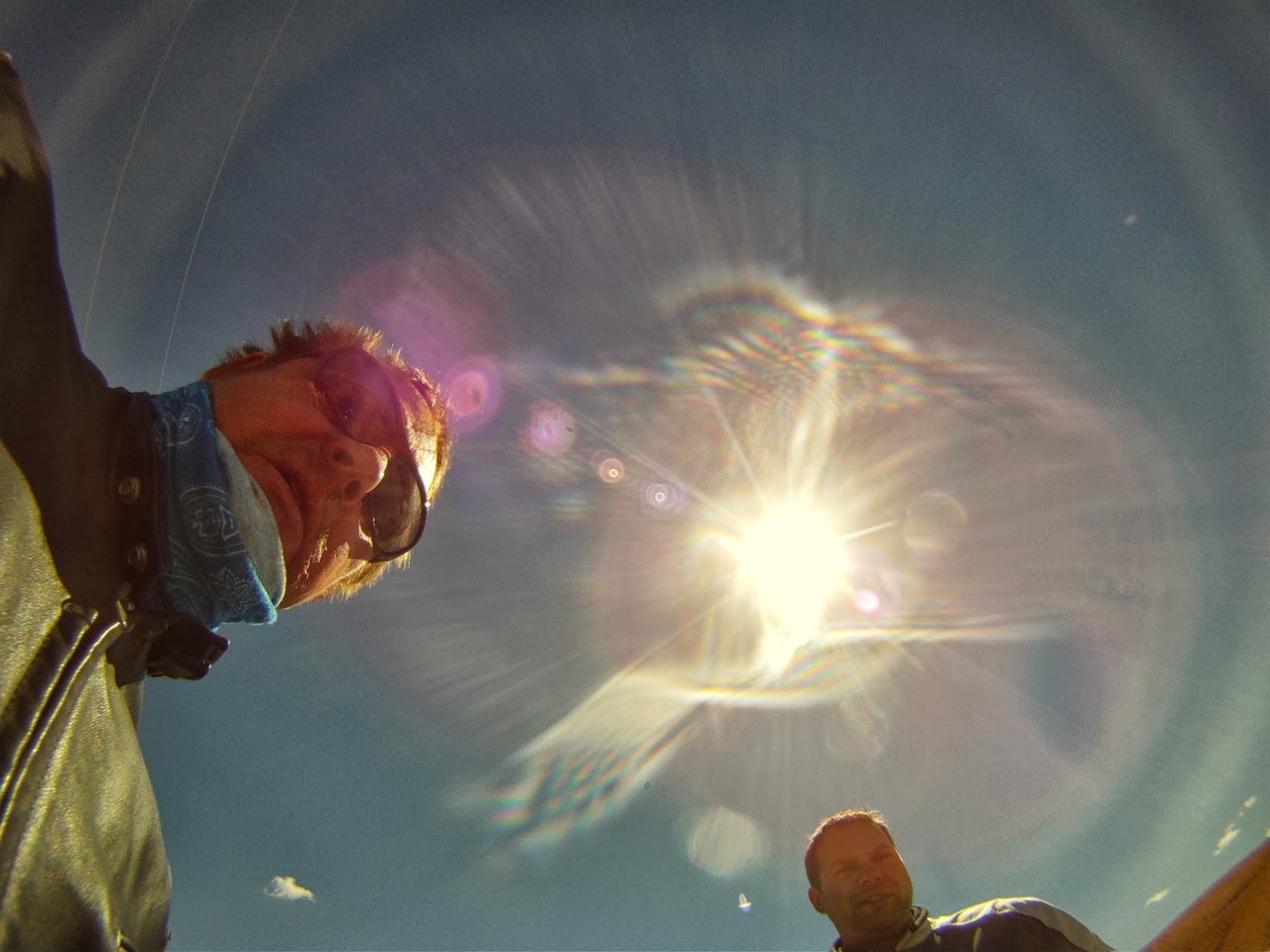 ©2013 Words and Pictures by Jim Foreman 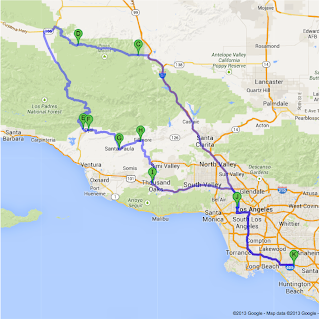 Date of Ride: 26th Sept 2013
Destination: Ojai, CA via Frazier Park, CA
Total Miles: 333
Best Time to Go: Spring, Summer, Fall.
Winter too, if bundled up and not snowing.
Fun Factor: 10
Police Seen: 2 (One on opposite side of I-5 Fwy, the other going the opposite way before Ojai.)
Max Speed Obtained: This wasn't a speed run.
Lunch Enjoyed At: The Deer Lodge-Ojai, CA.
Number of Counties Entered: 6 (Orange, LA, Kern, San Luis Obispo, Santa Barbera and Ventura)
Number of Press Bikes Passed on Ride: 12
Number of Times We Thought About Work: 0

Map of the Trip: Google Maps

A couple of months ago, my friend, Mike Kurthy sent a video of his recent ride to Jackson, Wyoming.

Mike has been a friend since working together in 2005.  Mike is a movie trailer editor.  What's a trailer editor, you ask?   Movie Trailers are those coming attractions one sees before the movie is actually played.  Mike was recently interviewed about his job, here.

Since both of us have flexible work schedules, we decided on a weekday run.   We met up at his Miracle Mile home and proceeded to do ride all day, never thinking about work.

The initial goal was to get boring and tedious parts out of the way, first.  The decision was made to head up Interstate 5 to Frazier Park Mountain Road and 'backroad' it from there.  We both realized that it's always a good idea to carry something warm, along with thicker gloves, just in case it gets cold.  When we left, it was a nice 75º in Hollywood.  Pulling into Frazier Park revealed a chilly 50º with gusty winds.  We decided to fuel up and get some coffee to warm ourselves.

We weren't the only ones to feel this way as a group of fellow riders and their passengers could be heard uttering colorful epithets regarding the temperature change as they dismounted.

In all the commotion, a BMW R 1200 RT pulled up with a 'IrvSeaverBMW.com' sticker.  Further inspection revealed Irv Seaver BMW's Service Manager Jeff Ross.  Jeff was on his way to Mazda Raceway-Laguna Seca for the SBK Race that Sunday.  Jeff too, expressed his lack of feeling of his nether-region from the unexpected cold.

Figuring the temperature would get warmer, we proceeded westbound on Frazier Mountain Park Road.  One is instantly surrounded by pine trees and scattered cabins that make up Frazier Park.  We approached a 'Y' in the road.  Either choice presents interest.  To the left was Lockwood Valley Road which meets CA 33 some 20 miles north of Ojai.  Our choice was Cuddy Valley Road to the Right.  This leads to CA-166 and was a pleasant surprise.

Cuddy Valley Road continues on as Mil Potrero Road.  Another name change to Hudson Ranch Road and finally Cerro Noroeste Road as it ends at CA-166.

Mike's 2006 H-D Deluxe took to this road.  We maintained a nice lope as we encountered one perfect, positive camber sweeper after another.  The grin on my face could not be altered during the course of riding this road.  It was a pleasant surprise!  A map makes it appear mildly interesting.  A map, however, does not reveal the many elevation changes nor the majestic views and scenery.

We were not alone in this assessment.  We stopped to take a quick break on the side of the road, the group of H-D riders we saw at the gas station along with some adventure riders and Jeff Ross passed us by.  Without fail, all the riders were grinning a "post-climax smile" as we exchanged waves.

At the end of this glorious road, we made a left onto CA-166 for a short way and then another left onto CA-33 to Ojai.  CA-33 is also called Maricopa Hwy.  It runs alongside a mostly dry river.  Again, on a map it looks uninteresting, but actually traveling the road is entirely something different.  More elevation changes and brilliant scenery kept us both from being bored.

It was interesting to ride alongside a dry river as the colors around were quite vivid and dynamic.
While traveling south, we witnessed a gaggle of green Kawasaki Ninja 1000's headed in the opposite direction.  It turned out to be a press launch of the new 2014 Ninja 1000-ABS with the touring luggage.  There were three groups of four made up of editors from your favorite motorcycle rags.  (Rider, Cycle World, Motorcyclist, etc.)


They were on their way north to Monterey, CA and the Mazda Raceway-Laguna Seca, too.  Again, for the aforementioned SBK race this weekend.

As we continued south on Maricopa Hwy (CA-33).  After the tunnels, the road changed and became a motorcyclists dream.  Spectacular scenery, beautiful twisties and elevation changes made up this sought after stretch of asphalt.

It would not be unreasonable to grab lunch in Ojai and immediately return to this stretch of highway for dessert.  It's that satisfying!

Speaking of lunch, it was approaching 2:15pm and we were both getting quite famished.  We decided on The Deer Lodge for lunch.  The Deer Lodge is a motorcycle friendly destination that is quite lively on weekends.  They happen to offer excellent food, too!  The venison burger with sweet potato fries was my culinary delight.  Mike had the 1/2 pound burger with cheese.  We both remarked how much we've enjoyed the run so far and to plot the remainder of our trip.  There are lots of options that came up such as heading down CA-150 to Santa Paula and then hopping on Westlake Blvd to PCH.  Another option was to continue on CA-126 out of Santa Paula toward Castaic and hit Lake Hughes Rd, San Francisquito Canyon Rd and Bouquet Canyon Rd.  The frigid weather canceled out this run.  Mike told me that he does not do well with night riding.  Given the time in the afternoon, we decided to leisurely make our way to the 101 Freeway and head back to Hollywood.

After finishing lunch and settling the bill, we decided to switch bikes.  Mike jumped on my retired California Highway Patrol cruiser while the Deluxe was under my control.  The bikes are as different as night and day.  Not better or worse, just different.

With full bellies, we headed left on CA-150 from the end of the Maricopa Hwy (CA-33).  Santa Paula was our next stop.  The 150 has an exciting stretch of road several miles out of Ojai.  Lot's of motorcycle perfect corners and elevation changes make this a lot of fun.  Mike noticed his floorboard scrapping on several of the corners.  Whoops! 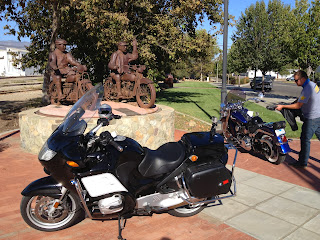 We made our way to the St. Francis Disaster Memorial.  Many people ride by and simply wave to the statues on their motorbikes seemingly waving to other riders.

From the plaque at the base of the memorial.

"Among the many heroes of the flood that evening were two motorcycle officers who rode through the night to warn the sleeping citizens in the low lying areas of Santa Paula that a torrent of water was about to inundate their homes. Their heroic efforts saved countless lives.  Their wild ride that night was stopped at 3:05 a.m. when the wall of water swept through Santa Paula on its way to the ocean."

More information and a fascinating account of the disaster can be read here.

We concluded that our decision to head back to the Miracle Mile area off Wilshire Blvd was a wise one, given the approaching sunset.  We continued south on CA-150 to CA-126 (E Telegraph Road) toward Fillmore.  Once in Fillmore, we proceeded to CA-23 South.  This was another treat as the stretch known as Grimes Canyon Road was upon us.  More smile generating fun was enjoyed on our way to Moorpark.  In Moorpark, we made a left at E Los Angeles Ave (118) and gassed up our bikes.  Continuing east, we again joined the 23 Freeway, this time, south toward Thousand Oaks.

We followed the 101 Freeway all the way into Hollywood.  We mostly kept to 35-45 MPH.  That was OK given the traffic.  As traffic was becoming more congested heading into Downtown LA, we elected to exit at Barham Blvd.  At the light at the off-ramp, I told Mike I have a treat. 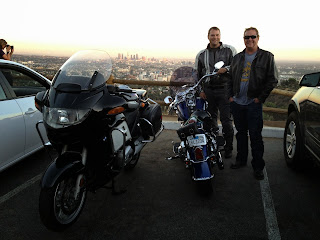 We rode up the eastern end of Mulholland Drive to a charming viewpoint overlooking Downtown, Hollywood and most of the city.  The viewpoint is perched above the famous Hollywood Bowl.  Tour bus after tour bus brought visitors to this famous location.  Our bikes were a hit!  Many of the cuter visitors were offered an opportunity to sit on the bike and snap a photo with the city in the background.

It dawned on me that if one is single and has a nice bike and a good attitude, it wouldn't take more than an hour or two to secure friendships or companionship from among the many guests.

We wrapped up with Mike pulling into his home as dusk settled.  We chatted for a while and then I returned to Orange County to call it a night.

It's always cool when one can add another riding friend to the mix.  Today was no exception.