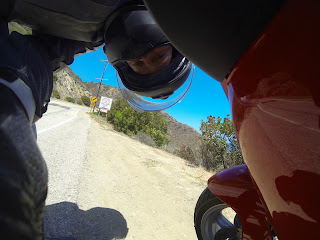 ©2013 Photos and words by Jim Foreman 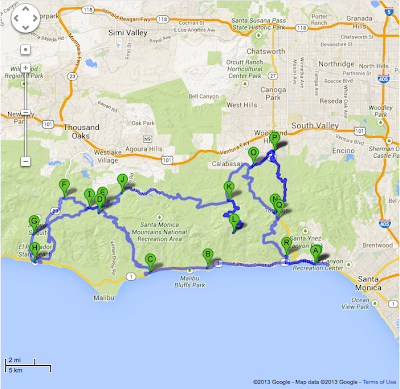 Aug 07, 2013 -Today, is a bit of a sad day.  My friend Daniel Rice (excuse for taking time off work to ride) has to fly back to Shanghai, China to begin his fall semester.  I can say that we made the most of it!  Last weekend we did a track day at Buttonwillow Raceway with TrackDaz.  We both had an amazing time and both became much better riders because of it.

Because it was Daniel's last full day in SoCal, we decided to go big.  We began the ride at the Chevron Station at the corner of Sunset Blvd and Pacific Coast Highway in Pacific Palisades.  This is a good place to gas up and meet friends.  From there a quick right turn onto PCH was the start of this great day riding. 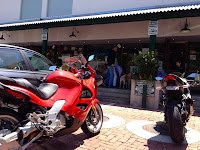 After being on PCH for a few minutes we both realized at the same time that we were both hungry.  It was lunchtime, so we decided on returning to Malibu Kitchen for some great Boar's Head Deli Sandwiches.  Malibu Kitchen is nestled in a shopping center right behind the Shell Station at PCH and Cross Creek.  There are several cafes in this area.  There is a Starbucks (with tons of celebrity sightings) and across the street toward the back is a Coffee Bean & Tea Leaf with a nice patio.
If you enjoy sightseeing or star gazing, there are few better places in SoCal to enjoy this. 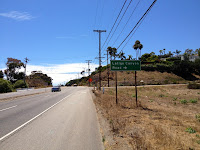 With our very satisfying sandwiches put down, we continued our journey.  Next stop, Latigo Canyon Road.  Latigo Canyon Road is one that Daniel and I have run numerous times.  At the base, we pulled off, fired up the GoPRO Cameras and made haste.  We are both familiar with Latigo and wanted to see how our skills have improved as a result of our track day experience.  I was a lot more confident, smooth and found it very enjoyable.  Daniel too was taking the corners like a pro.  We followed it up to Kanan-Dume Road and took a right and then an immediate left at Mulholland Hwy.  Most riders take a right on Mulholland to run 'The Snake'.  On any weekend one will see photographers and videographers shooting pics and video of bikes and cars running through.  Some even have YouTube channels such as RnickyMouse.  We saved 'The Snake' for later.  Decker Canyon was our immediate goal. 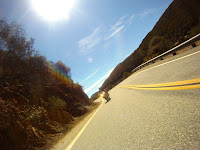 On Mulholland Hwy headed west, we passed the branch for Encinal Canyon and Westlake Blvd.  At the branch to Decker Canyon Rd, keep left or make sure you have good U-Turn skills.  Like Latigo Canyon, Decker Canyon Rd has lots of technical corners but it also has some nice fast sweepers and beautiful vistas as you approach the ocean.  At the base of Decker Canyon Rd and PCH, we made a left onto PCH and then a Left onto Encinal Canyon.
Many sportbikers skip Encinal Canyon road but I tell you this...  Don't skip it.  It's a fast road with some very cool sweepers.  The Speed Limit is 55MPH meaning you can take these very aggressively.  If you're like me, you'll even scrape your pegs on the way.  Going up Encinal Canyon there is little traffic so let it loose.  At the end of Encinal Canyon, we rejoined Mulholland Hwy and re-crossed Kanan-Dume Rd and began our run on 'The Snake' and the famous 'Dead Man's Curve'. 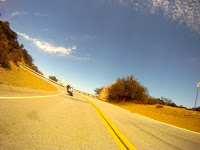 'The Snake' basically starts at The Rock Store and works it's way up Mulholland to the 'Top of the Snake' which is the 'Dead Man's Curve'.   We went the other direction and started at the top and worked out way down.  The corners are tight and leave little room for error.  If it's your first time through here, slow down for the first couple runs until you know what's coming.  Way too many sport riders crash here because of overconfidence and unskilled ego.  We had a blast and again I scraped my foot peg going through.  We ended up at the deserted Rock Store and stopped to grab a few pics. 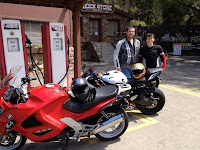 For those wondering, Daniel is riding a 2013 Kawasaki ZX-6R with ABS.  (BMW Doesn't make a 600 Supersport)  In the future He wants an S 1000 RR or HP4 but for now, this'll do.  I'm riding a 1999 BMW K 1200 RS (with a Wunderlich Performance Chip).  These were the same bikes we recently took to the track.
From the Rock Store we headed east on Mulholland Hwy.  Again, many sportbikers avoid this but don't.  There are lots more very fast sweepers and elevation changes that will keep one's interest piqued. 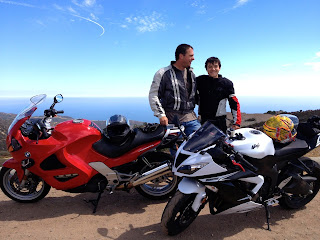 We followed Mulholland to Stunt Rd and made a right.  Stunt Road is also amazing.  It has fast sweepers too but they're a little bit tighter.  If you're wearing knee sliders, you'll definitely be making new scratches.  Taking Stunt to the top reveals a visual treat.  There is an overlook with the Pacific Ocean below.  We parked our bikes and asked a group of onlookers to snap a photo of us.  They were chatting up about how they want to ride motorcycles and I encouraged them to take the Basic Riders Course through the MSF by signing up for a class.
From the top of Stunt Rd, we turned around and went right back down it.  Stunt Rd is just as much fun going down as it is going up!  We continued back to Mulholland Hwy and took it to Topanga Canyon Blvd.

Ah... Topanga Canyon Blvd.  Many sportbikers avoid this road because of the cars.  I say 'Bullocks!'  If you take a right on Topanga and just wait at the side of the road, you will witness a miracle akin to Moses parting the Red Sea.  In a short while, you'll see a two to three minute gap of cars going south.  We just crept on Topanga until a car caught up to us.  We had the whole side to ourselves until we caught up to the cars near the village of Topanga.  The speed limit is 45 but you can do much more.  The sweepers are intense and without the aforementioned cars in the way, it worked out really well.  More sparks were flying from my footpegs as I raced through a perfect carousel.  Lot's of elevation changes also work well.  This trick only seems to work going south on Topanga Canyon.  We got to Old Topanga Canyon Road and made a right and took it back up to Mulholland Hwy.  We made a right and ran Topanga Canyon Blvd AGAIN!  We were like a couple of crack addicts desperate for our next hit.  Old Topanga Canyon Rd shouldn't be discounted either.  It's a lovely road with many fine and well cambered corners and switchbacks.
The village of Topanga has a wealth of history including being one of the hangouts of John Phillips (the Mamas and the Papas), Brian Wilson (Beach Boys) and Charles Manson(Cult Leader).  Topanga is also the location Peter Fonda and Dennis Hopper chose to film the Hippie Commune scene of 'Easy Rider' when the New Buffalo Commune in Taos, New Mexico refused to let them shoot there.  If you have the time, explore a little bit.  You'll certainly be thankful you did!
Shortly After Old Topanga Canyon Road on the Right is Fernwood Pacific Dr.  It becomes Tuna Canyon Road.  Tuna Canyon is difficult.  It's a one-way, one lane challenge on a Motorcycle.  It's downhill, very technical and lacks guardrails so if you misjudge, it'll be a long way down.  Lots of bicyclists take this road so please keep a watch out.  At the bottom of Tuna Canyon Rd, we made a left onto PCH and a quick left onto Sunset and into the 76 station. 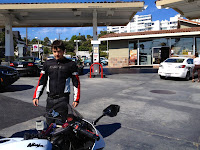 This was a great run but there are even more canyons worth running.  We would have run them if we had more time.  Look up Las Flores Canyon road (but going uphill is really the preferred way)  Downhill, there is a really nasty, narrow, off camber corner that will really mess up your day toward the base.  You'll know it because the road is also really bad.  Piuma Rd, Yerba Buena, Deer Creek and others also deserve lots of attention.

Being in canyons, road debris can be a factor, so take those blind corners a little slower just in case there is some nastiness on the road.
Soon an Off-Road Adventure will be posted for the dual-sporters.  Stay tuned! 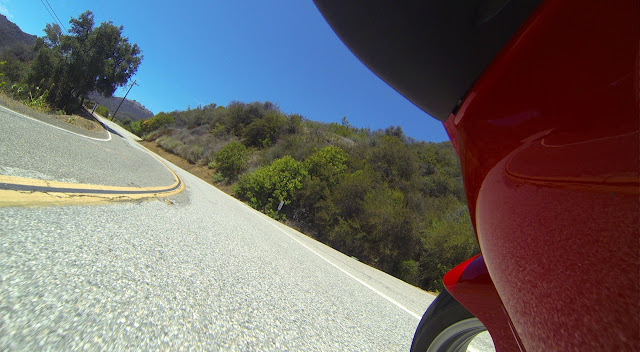