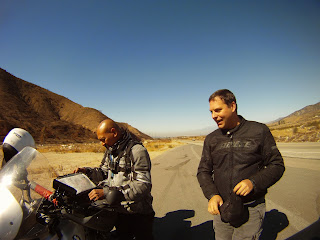 The World Is So Beautiful.  This Is Why I Do It... To Share The World's Beauty With Everyone.  This Is WHY I Ride For Peace.

Words and Photos by Jim Foreman 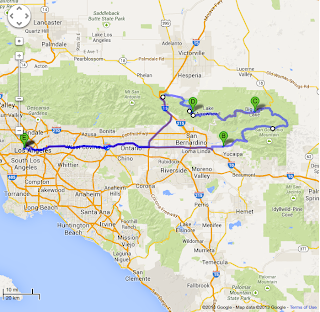 In 2006, Jeffrey Polnaja embarked on his journey to embrace, promote and educate everyone he comes in contact with about the beauty of the world and the need for world peace.  World Peace is a huge topic.  'World Peace' is often used as a cliché for every beauty pageant contestant and 70's pacifist 'hippie', but what is it?
Perhaps it's best to start at the beginning.  Along with the rest of the world, Jeffrey and his family sat glued to the television as the twin towers were struck on September 11th, 2001.  As the horror of watching the second plane hit the tower was realized, Jeffrey's ten year old son began to ask his father some life changing questions.  "Dad, we're taught to love each other, why are these people killing each other?"  Next came the profound moment in Jeffrey's life.  His son turned to him and in all seriousness said, "Dad, you have to do something about this!"  Jeffrey thought to himself, "What can I do?" "I'm just a businessman in Indonesia."  His son then pointed out that he's also a rider, to which Jeffrey nodded and agreed.  Jeffrey's son reiterated, "You're a good rider, Dad...  You need to Ride For Peace!"  Thinking his son's comments were that of a simple 10 year old, Jeffrey quickly got back into his routine, but about 6 months later, his son came to him and told him, sternly, "Well Dad, are you going to do it?  Are you going to Ride for Peace?"
Jeffrey knew that his life had changed and put forward actions that would enable him to begin his 'Ride For Peace'.


Leaving from Indonesia in 2006, Jeffrey traveled up through Asia, Africa and Europe. Returning to Indonesia in 2009 Jeffrey began work on his book, "Wind Rider".  It's not available on Amazon or your local bookseller as it's written in Jeffrey's native language.  Plans are in place to have it translated.
Upon the publication of his book, Jeffrey took up the second leg of his journey.  Riding across Siberia, through Japan, and South Korea, the bike was shipped to Vancouver, and his North American journey began.
Jeffrey traveled through Canada, Alaska and 38 states when our paths crossed at Irv Seaver BMW in Orange, CA.  I had known about Jeffrey and 'Ride For Peace' from the many friends who had met him throughout his journey.
Thus began a solid friendship that transcends motorcycling.

On to the ride....
Jeffrey is staying with good friends in 'Koreatown' in Los Angeles.  Rather than have him meet at the dealership, it was decided to meet on Wilshire, just one block away from the former Ambassador Hotel where RFK was shot.  I pointed this out to Jeffrey at the start of our ride.  He had no idea.  He told me he would visit the site the following day.
We talked about the route and then mounted up our respective bikes.
We headed a couple block east on Wilshire, South on Vermont and then East on Interstate 10.  We left after 9am which meant the majority of rush-hour traffic was behind us.   As is becoming custom, we elected to get the bulk of the freeway travel out of the way first.
As we traversed I-10 it became evident that Jeffrey's riding style and mine were quite compatible.  He'd recognize my head turns and my intentions to change lanes.  He'd "run cover" for me and I'd run cover for him making the trip quick and safe.
We exited the 10 in Redlands at University Street.  If you're hungry or need some coffee, there are many good choices if you exit on Orange St, just prior to University St.  We were doing good, so we made a Left at University Street and followed it up to a right on E Lugonia Ave (Hwy 38).  This is a good time to gas up as options are fewer and more expensive on the mountain.  Hwy 38 becomes Metone Blvd and then Mill Creek Road before finally settling in as just Hwy 38 going up the mountain. 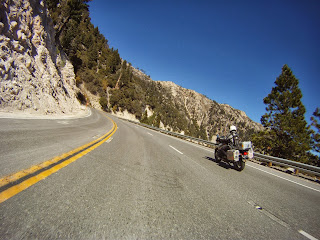 It became quickly evident that we both loved some good corners.  Highway 38 provided some stellar examples.
Highway 38 twists and turns its way for many miles of scenic beauty, campgrounds and small villages.  Of note, it's in one of these small villages that Ex-LAPD Cop Christopher Dorner holed up in a cabin and was ultimately killed.  At this point, Highway 38 is also called Greenspot Blvd.   We arrived at Big Bear Lake.  We made a Left at E Big Bear Lake Blvd (Highway 18), but not before temporarily losing Jeffrey.  I turned back to find him.  He had been photographing a street sign at "Malabar Way."  Malabar is a town on the Indonesian island of Java.  It's nestled at the base of Mount Malabar, a volcano that makes up the center of the island.  Jeffrey told me some of it's history as a tea growing region and noted that Malabar was even spelled the same way.
Now with Jeffrey and I together again we made our way west toward the lake.  The road "Ys" off at Division Road allowing you to run the northern shore of the lake or stay on the southern and more developed part.  We opted for the southern and more developed part.  It doesn't matter which you choose as both roads meet up again at the dam. 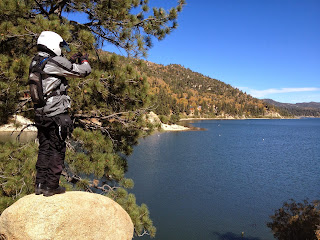 At the far west shore of the lake, near the dam, we pulled over and took some pictures of Big Bear Lake.  Looking away from the dam, the lake is pristine with lush forest capped by deep blue skies.  While taking these pictures, we both reflected on the fact that this beauty was only just over an hour away from all of the hustle and bustle of Los Angeles.  If one is looking for a weekend escape without wasting the weekend getting there, then it would be wise to strongly consider Big Bear Lake.
It was during this time of photography and reflection that my imagination was directed upward.  At the top of the granite outcropping stood a shell of an abandoned structure.  I've always been a sucker for such ruins.  The pathway up to it was easily found, so I suggested to Jeffrey that we go check it out.  That's the best part of this trip.  We weren't in any rush.  We stopped when something looked interesting and didn't really bother with the time. 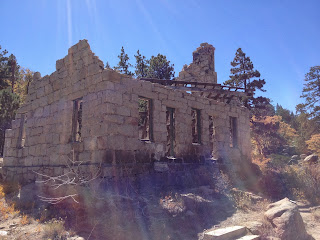 We made the short ride up the unlabeled road to discover a multi-room structure in grave disrepair.  Initial research could not tell me what or whom this belonged to, but some things were evident.  It had been in use up until the 80's or 90's as the frame that supported the roof was not terribly weathered.  There didn't appear to be any electrical circuits in the walls, and the windows were barred up.  There was old tile in an area that would probably make the kitchen but no drains or locations of sewer or septic lines.  The structure did have a fireplace and seemed well built.  I'd love to learn more about this structure's history.  Across the roadway was the weather sensing equipment for Big Bear Lake. 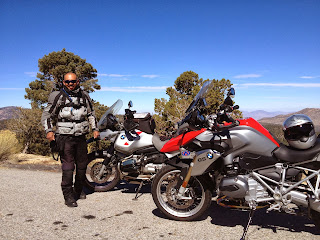 We continued on along the 'Rim of the World Highway' headed toward Lake Arrowhead.  This is one of the most beautiful roadways in SoCal.  It would be a shame not to take advantage of some of the turnouts to take pictures and reflect on life.
This stretch is a motorcyclists paradise.  Especially on the weekdays where traffic is light.  A rider must remain vigilant for road debris.  On a previous trip, several medium sized boulders dislodged from the cliff side above and landed on the roadway.  Being on a motorbike made navigating these obstacles a cinch.  On this trip, an old dry tree gave way and fell onto the roadway.  A maintenance worker was cutting it up for removal and trying to direct traffic so please keep your eyes up and aware.
We ultimately made it up to Lake Arrowhead and the turnoff to Lake Arrowhead Village.  By this time, we were rather hungry.  Unfortunately, I lost Jeffrey a second time, so I back tracked and found him waiting for me.  He noticed my rear-facing GoPRO camera fell off my bike, so he went to retrieve it.  Once the GoPro was retrieved, Jeffrey didn't know which way I turned.  I was very grateful for the recovery and was reminded how great it is to ride with good friends.
We parked our bikes and tried to figure out what to eat.  Given that it was a weekday, and after 2pm in the afternoon, our choices were limited.  We never considered Mc Donald's or Subway, but looked toward village favorites Papgayos and Woody's.  Jeffrey was about to spend a year in Mexico, Central and South America, so we opted to skip Papagayos (Mexican) and go with Woody's Boathouse.  Woody's was a typical tourist restaurant.  The food was decent but nothing noteworthy.  The meal served it's purpose and allowed Jeffrey and me some time to talk about our different upbringings and travels.
After finishing lunch, we went for a coffee.  I went next door to buy a long-sleeve undershirt as I was a wee bit underdressed.
We mounted our bikes and continued on Highway 18 headed west.
It should be noted that Hwy 330 and Hwy 18 to and from the valley floor also offer some high speed sweepers that can be a thrill for motorcyclists.  In some parts of both routes though, the road is heavily patched.  When warm these patches become rather soupy and slippery.
We elected to head north onto highway 138 through Crestline.  The intention was to take the 138 to Interstate 15.  Then we would ride Angeles Crest Highway back into town.  Despite our intention, the day was fast approaching dusk and running a mountain road at night is unwise.  Jeffrey and I decided it would be best to head home and run Highway 2 on a separate day.
On the ride back, I often reflected how fortunate I was to have friends such as Jeffrey and how much at peace I felt upon reaching my place again. 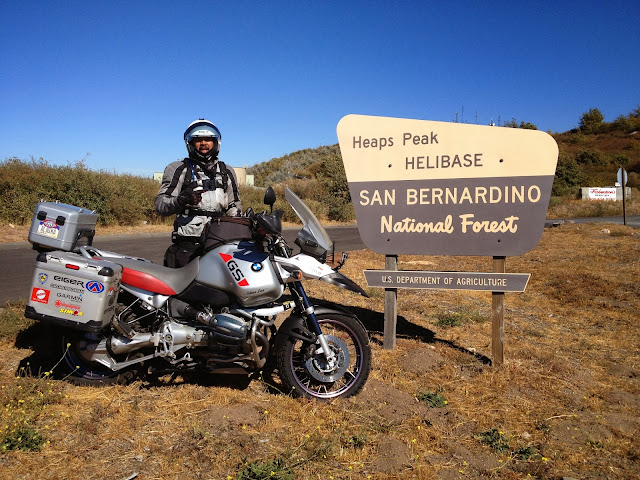