A practical and noteworthy return to sport touring 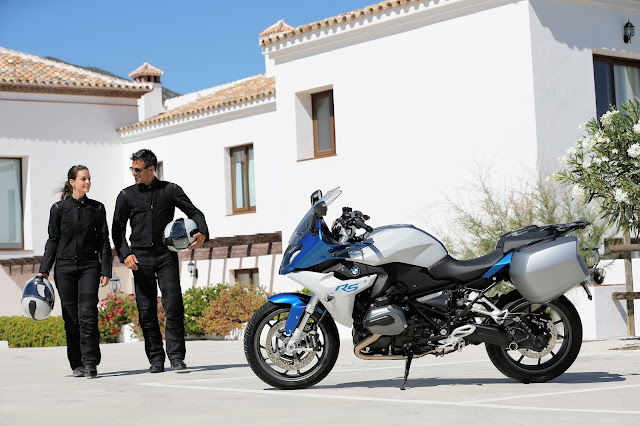 Words and photos by Jim Foreman

Upon its first glance, it was easy to be smitten with the new R 1200 RS.  The Blue and White colors seemed to accent the bike and carry one’s imagination with it.

The newly imagined RS seemed to be a perfect ‘Sport-Tourer.'  Nestled between the R 1200 R and the R 1200 RT, the RS combines the best of both of those bikes.

Certainly sporty like the R 1200 R, the RS has plenty of power and thrills to keep all levels of riders satisfied.  With it’s simple yet effective half-fairing and windscreen, long distance rides at a clipper’s pace is easy and enjoyable.  Leaving the luxury and bulk of the RT behind, the RS is a perfect mix for a rider inclined to this style of riding. 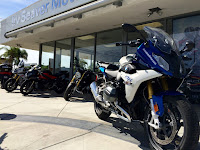 This time out, Evan Bell, owner of Irv Seaver BMW in Orange, CA, handed me the keys to the new 2016 BMW R 1200 RS for the weekend.  This weekend is the same weekend I was to participate in a Streetmasters course at Willow Springs International Raceway’s Horse Theif Mile.

The RS Demo had 40 miles on the odometer when riding off the lot.  Once I got the geometry in my head, the R 1200 RS came alive.

Having experience with the amazing water-cooled boxer engines, I changed the riding mode and suspension, both, to ‘Dynamic’. 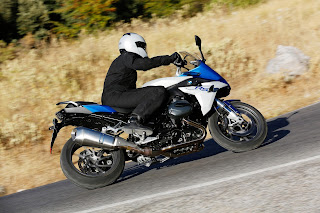 To me, the bike has perfect ergonomics.  'A perfect fit' was also a similar conclusion for the half-dozen people I let ride the RS.  I'm 6-04 with a 34" inseam.  Riders of all different sizes commented on the comfortable and enjoyable fit.  The seating position is slightly leaning forward with the footpegs, comfortably beneath the rider’s mass.

Riding the new RS is so natural and effortless that it inspires confidence and appreciation.  Steering is light and easy.  Clutch and brakes respond with precision.  The throttle is always smooth and responsive.

Riding with a group to Lancaster was both fun and interesting.  The group I was with preferred not to lane-share.  As Los Angeles traffic notoriously backed up, it was effortless to bring the bike to a quarter walking speed and see how long I could keep from touching the ground.  It wasn’t obvious that anyone riding in our group noticed until I finally had to put my foot down.  I saw pointing at me in my mirrors and gave a nice thumbs up in return.

Finally departing the motorway, the fuel level on the bike was reading a quarter tank.  Knowing there would be no fuel station until Palmdale, I motioned to the leader of the group and veered off to fuel up.

This fortuitous event allowed me to run up Angeles Crest Highway and Angeles Forest Highway on my own, without being slowed down by other’s more conservative pace.

Fueled up and personally hydrated, I ran up the notable Angeles Crest Highway.  Dropping into the corners felt awesome on that bike.  The Boxer Twin was running like a thoroughbred and making the ride delightful and spirited.  The powerband on the RS was meaty and full of grunt until the top revs got near.  Furthermore, the stability both leaned over and on straightaways was incredible.  There’s a stretch of Angeles Forest Road before it meets up with the 14 Freeway.  Running a rather high and autobahn-grade rate of speed showed how beautifully balanced the RS is.

Before and during the Streetmasters course, several people were offered to try out the R 1200 RS.  It was a demo bike, after all.  The response was one of joy by the riders.  Curiously, the names “Evil One” and “Bad Man” came my way by their lovely partners.

Racer Walt Fulton completely loved it.  No stranger to the RS lineup, he boasts that he owns two R 1100 RS’ from the 1990’s.  Walt ran the RS through Horse Thief Mile at a wicked pace.  Most people in the class to looked toward the track and appreciated what a pro can do.

Walt did seem to have a brighter smile for the rest of the day.

The following day, I met up with two great friends.  Yes, many of my friends also ride.  John Kenji Hawley and Emmanuel Paraskiv jumped on their R 1200 R and GSX-R 600s to ride Angeles Crest Highway again.  Splitting lanes on the RS was easy.  The bike’s seating position gives easy visibility to traffic around while maintaining maximum control and maneuverability of the bike.

At one of the scenic turnouts on Angeles Crest, John and I traded bikes.  John took up the RS and was instantly impressed.  John isn’t one to overact.  He asked several great questions and thought about it, quite a bit.  John summed up his riding experience by saying, "It's a really nice bike. Right off, I could tell it was very familiar to my R 1200 R, but far superior in handling, smoothness and power. I nearly got pulled off the bike when I took off the first time."

When it was Emmanuel’s turn,  he took to it like a bear to honey.  Even from behind, one could see the huge grin on his face.

Emmanuel’s previous riding experience is made up of a Honda Rebel and the GSX-R.  Needless to say, the GSX-R and I are NOT friends on Facebook or real life.

Emmanuel simply took off his helmet at the next meeting point, hugged me, and stated loudly, “I LOVE BMW!”  Emmanuel mentioned that he didn’t much care for the last-generation Oil/Air Cooled R 1200 R.   He said he wants to find a way to own the R 1200 RS.  Naturally, I casually dropped that Irv Seaver BMW offers to finance, with a huge grin.

A good friend and international pilot, Alf Assouad, based in Australia, recently picked one up.  Here's what Alf has to say: "I love its power delivery and it's a real joy to ride. On the highway, I find it is much more solid and stable than my previous F 800 ST.  It's not effected, as much, by strong cross winds. Around corners it is as solid as a rock and on rails. This bike is exhilarating to ride.  Once the first service has been completed and the rev limiter removed, it will be interesting to explore the bike's full potential."

Previously, the S 1000 XR was given a long and enjoyable run.  Between the two, my riding style leans a little more toward the XR.  That said, as an owner of two K 1200 RS’ and one who appreciated simple sport-touring, I would not be disappointed if the amazing R 1200 RS wound up in my garage.
I do love the R 1200 RS.  It so happens that I simply love the S 1000 XR a little more.

… I do have room for two more…

If you are in Southern California and wish to try the R 1200 RS, S 1000 XR or any other BMW Motorcycle, please come to Irv Seaver BMW in Orange County, CA.  There you'll find a fully stocked parts department, extensive apparel department and the best selection of new and pre-owned motorcycles.  There's some great people there, too!