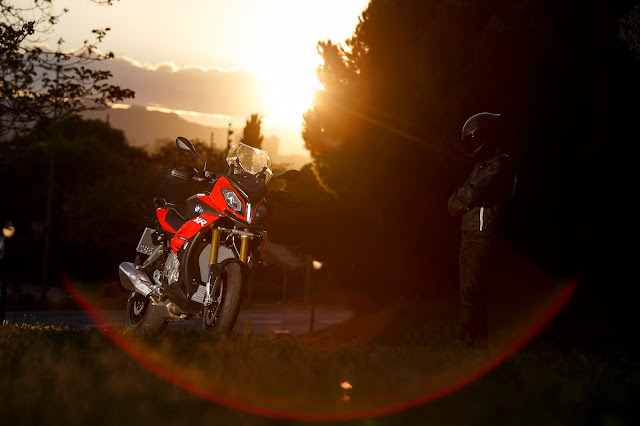 Story and Photos by Jim Foreman

Walking into Irv Seaver BMW in Orange County, CA, the sight of the new 2016 BMW S 1000 XR Demo model took me aback.  I knew the demo bike was on the way, but the thought of getting to ride it had reached fever pitch.

Here it was, finally before me.  Boldly heading inside, I asked if the XR Demo was slated for anyone.  Looking on the reservation board, the answer was no.  Cool, I thought.  About this time, my good friend Devin Strange at Irv Seaver BMW, approached, nodded, and smiled.  Devin had taken the S 1000 XR out the weekend prior and was still grinning from the experience.  I knew from that expression alone that I was in for something very special.

Changing quickly into gear, a quick photo, before I left, was all that remained.  The GoPro was was mounted and running, and the smile on my face expanded to a broad 'Cheshire Cat' crescent. 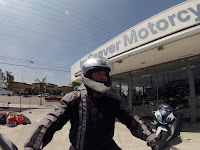 Immediately upon putting my feet on the pegs, everything simply felt right.   Time was limited, so I decided to hit the freeway to get to Ortega Highway.  Getting to the on-ramp, I filtered to the front of the traffic line several times and the bike behaved beautifully.  The turning radius is much sharper than the S 1000 RR.  Engelbert Quechenberger and Sonny Singhanate of the Police Riding Technique Academy (PRTA) would be impressed with the bike and what I did with it.

At high speed (not telling how high) the S 1000 XR loped as if that were it’s natural state.  The cruise control worked beautifully and disengaged cleanly when either the brake or clutch lever was tapped, or the throttle was rolled closed.  Those riders without cruise control may be quick to make childish remarks, but when it’s used and works intuitively well, all boorish comments dissipate instantly.  The value and usefulness are glaringly evident.  While riding on the interstate, I seemed to get more drivers looking over at me, and the bike, than is typical.  The XR loved to show off.  If I wanted to get out of a blind spot, the bike complied with a beautiful growl and leaped forward.  If a vehicle needed to be passed, it was effortless to do it safely and with precision.  The XR felt planted at high speed with no apologies.

Exiting at Ortega Highway (CA-74), from Interstate 5, I made a left turn and headed to Lake Elsinore.  At every stop light, I received tremendous attention from men and especially women.  Soccer moms, college co-eds, and professional women alike all gazed at the bike and her pilot with lustful intent.  Crossing Antonio Parkway, Ortega Highway starts to become the road riders, near and far, flock toward. 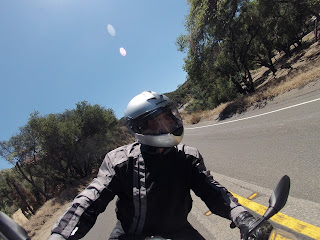 Dipping into the first good sweeper, the bike felt completely natural and confidence inspiring.  Further along are some beautiful 180º sweepers that are well cambered.  Again the bike acted as if it were on rails and even begged me to take it faster.  Without citing numbers, for fear of setting a bad example, the XR was able to take these corners at significantly higher speeds than would be prudent on other bikes.
Corner after corner, the XR flicked back and forth with ease.  At one point, the XR seemed to completely disappear.  The XR simply went where I willed it to go with hardly more effort than a thought.  It was as if the bike was no longer there, and I was flying through the air.  It’s a remarkable feeling that, in all my experience as a rider, has never happened before.

Using the quick-shifter both up and down was easy and uncomplicated.  When passing a slower vehicle, a quick foot tap down, to drop a gear, and a roll on the throttle were all that was needed to put the vehicle in my side view mirrors.

Slowing down at El Cariso Village, the temptation to see what the XR could do on some less ideal roads was pressing.  A left at North Main Divide led to a loop of little-used picnic spots and campgrounds to satisfy the temptation.  The road varied from nice flat asphalt to asphalt covered with pea gravel and broken up, goat-trail, asphalt.  There are some elevation changes along the way, too.  A lot of interesting debris could be seen, strewn about, including several pairs of knickers, some pink heels, a pair of shorts and tons of condoms and wrappers.  It seems that this is where Lake Elsinore locals go for romance. 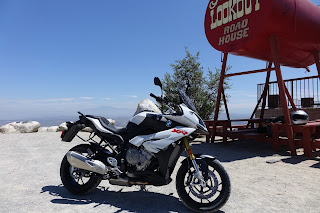 The loop is about 8 miles and is an interesting and scenic run, despite the aftermath of lustful desire.  After about 20 minutes, the road eventually takes you back to Ortega Highway.  Before you ask, "Is the XR a good bike for off-road?" let me say, yes and no...  It's fine on hard dirt or gravel.  It can handle sand.  It's simply not a GS with all the bash plates and protection offerings.  During the ride, it was taken a little off-road.  It performed great.  If you are serious about rougher roads than what I describe, this may not be the solution for you.  Supposing you are primarily a street rider and you don't mind taking it off the asphalt every now and then, the XR will perform admirably.

As is custom, a stop at The Lookout was in order.  Photos and some water to hydrate were necessary.  It is also a good opportunity to place the GoPro in a different position.  Once rested, the XR and I set off for the crescendo of Ortega Highway from The Lookout to the valley floor.  Waiting as long as possible to give any cars ahead plenty of room, I finally took off.  Again, the XR seemed to float in the air much like a speeder bike from “Return of the Jedi”.

Having reached the bottom, in record time, a U-Turn was immediately initiated.   The incredible roadway was re-traversed, going uphill. At The Lookout, once again, a u-turn was made and the trek back down resumed.  Several other motorcyclists had a similar idea and we waved to each other, every time. 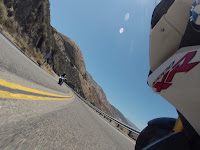 Knowing the deviations cost a bit of extra time, I opted to take I-15 to the 91 Freeway back to Irv Seaver BMW.  Again, the journey, even on the boring super slab, was fun, and filled with stares.

The total trip was three hours, in the saddle.  During that time, I felt great and could ride it all day.  The wind protection was perfect.  Being 6’04” (193cm) with a 34” inseam, I was able to easily flat-foot at a stop.  Riding the XR for extended periods was comfortable and natural.  The ergonomics were spot-on with no improvements necessary.

Some have commented that the grips get a little buzzy at higher speeds.  It is true.  Most high-performance liter bikes are buzzy at high RPMs and speeds.  The buzz wasn’t a bother to me, as I don’t ride with a death-grip.  Rather, a light and a looser grip is optimal with the XR.


Stat junkies will probably be disappointed as this reflects my thoughts and feelings riding the S 1000 XR.  Don't be dismayed though.  If it's stats you wish to salivate over, here's the official Technical Details from BMW's Page. 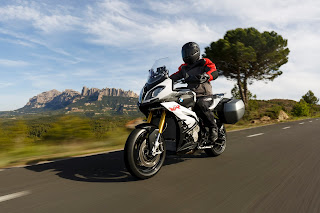 The BMW S 1000 XR is simply amazing.  It is the bike I truly want and will work hard to earn.  It does everything one could ever want and need in a motorbike, and it does it better than anything I’ve been on before.  It would be a demon at the racetrack.  In the canyons, the XR dances like a world champion ballroom dancer.  For commuting and freeway travel it is precise and planted with excellent visibility and wind protection.  Heated Handgrips, ABS, Ride Modes, ESE Electronic Suspension, Luggage options, Cruise Control, GPS Mount with control ring and perfect brake response make this the very best bike one has ever ridden, to date. 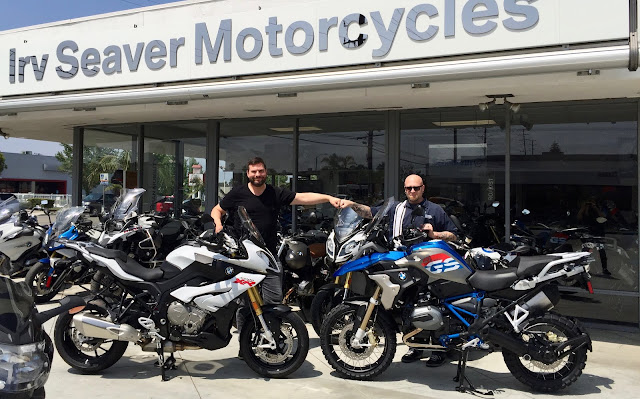 In May of 2017, the stars aligned, at least close enough, and I bought a new BMW S 1000 XR.  I love every moment riding on it.  So far, It's been on most of SoCal's best roads and has not left me wanting more.  It's also done distance and many of Arizona's awesome runs.
I love this bike more and more and am very glad I went with it.

Come into Irv Seaver BMW to take a test-ride yourself and see the Cheshire Cat make an appearance on your face. 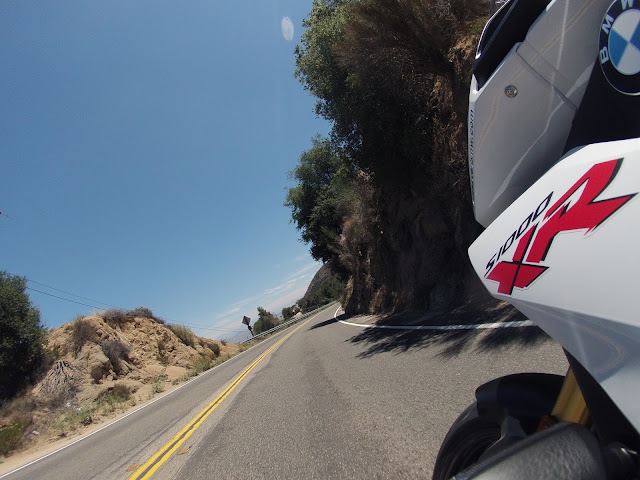 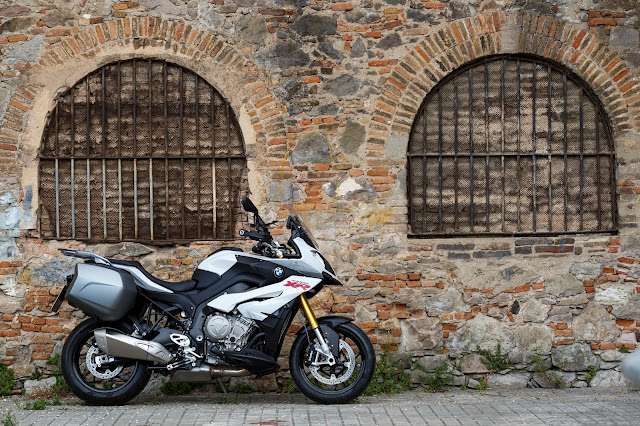