My friend, Michael Kurthy called me up one day, out of the blue.  He said, “Hey, …Want to go for a ride?”  “Sure,” was an immediate response.  Mike continued, “Ok, We leave Friday for a week in Southern Utah!”  This proposal left me thinking to myself, “Can I do this?”  The inner voice was going; work is light, so I have the time.  I have enough money.  Everything pointed to, “YES” and the trip was on.  The route we decided would take us through Southern Utah and several national parks and monuments.  The actual route we took varied from this narrative.  It was cut down a little bit to allow the journey to happen over four days.  Most people can get a Friday and Monday off to make a trip like this possible.

We met early in the morning at Starbucks Coffee in Pomona on Friday and began our quest.  For those who wonder, Mike was on his H-D Deluxe, and I was on the blue BMW K 1200 RS.  Neither of us had any idea what amazing and interesting sights and experiences would befall us over this trip.
The journey outlined truly begins in Las Vegas, Nevada.  Not only does Las Vegas have an excellent BMW Motorrad dealership, but naturally they have the H-D T-Shirt Store, which happens to sell and repair motorcycles too.  Just a funny side note… One recent year, Las Vegas H-D earned $18 Million selling motorcycles.  They made $42 million selling T-shirts that same year.  Something to think about while riding down the interstate.
Las Vegas also boasts a large Eagle Rider store.  If you’re flying into Las Vegas or don’t think your super sport or café racer is the right bike for the journey, you can always rent a bike.  Eagle Rider DOES rent BMW motorcycles and even offers group tours.
From Las Vegas, plan to leave early in the morning.  Try to save any planned debauchery for your return.  It’ll certainly be waiting for you.  If you are one who enjoys a fine drink after a good ride, it might serve you well to pick up a bottle before you head out.  Many counties and cities in Utah are dry.  This reality can be quite alarming for some after a long ride.
From Las Vegas, head north on the 15 toward Salt Lake City.  It’s best to make this run early before the heat becomes too intense.  The time goes by quickly.  A warning for those from CA, who typically enjoy a 14MPH grace from CHP.  Nevada, Arizona and Utah will be pulling you over when going just 9MPH over the speed limit.  The speed limits are higher than CA but watch it.  Nevada Highway Patrol is especially aggressive toward speeders at their CA and AZ borders.
Once you cross the state line into the northwest corner of Arizona, something amazing happens.  The terrain becomes more interesting.  Even though the Arizona section is short, it will be something you reflect on.
Interstate-15 begins to rise, fall and sway as you approach the Virgin River Gorge.  This is a great place to have a helmet mounted Go-Pro Camera.  It is beautiful, but it happens so fast.  You also need to keep your eyes up and on the road to successfully navigate this remarkably interesting stretch of highway.
Continue North on I-15 toward St. George.  In St. George, exit at State Street and bear right.  State Street is also Hwy 9.  Follow Hwy 9 (State Street) east and then north until you must make a right turn to continue on Hwy 9.  If you are suddenly on Hwy 17, you missed the turn-off.  Go back and head east on Hwy 9.
This road will begin to reveal the sheer beauty of Southern Utah.  The rock formations become more and more interesting as you approach Zion National Park.
The town of Rockville (Cue up R.E.M.) or Springdale are great places to enjoy lunch.  After lunch, you’ll be in your first National Park on this trip.  This one is particularly incredible.  Make sure your Go-Pro cameras are at full charged.  You won’t want to miss this.
If you don’t have a National Park Annual Pass, you should strongly consider getting one.  By the time you and your riding friend pay the fees for all the parks, you’d be saving money.  One pass is good for two motorcyclists. 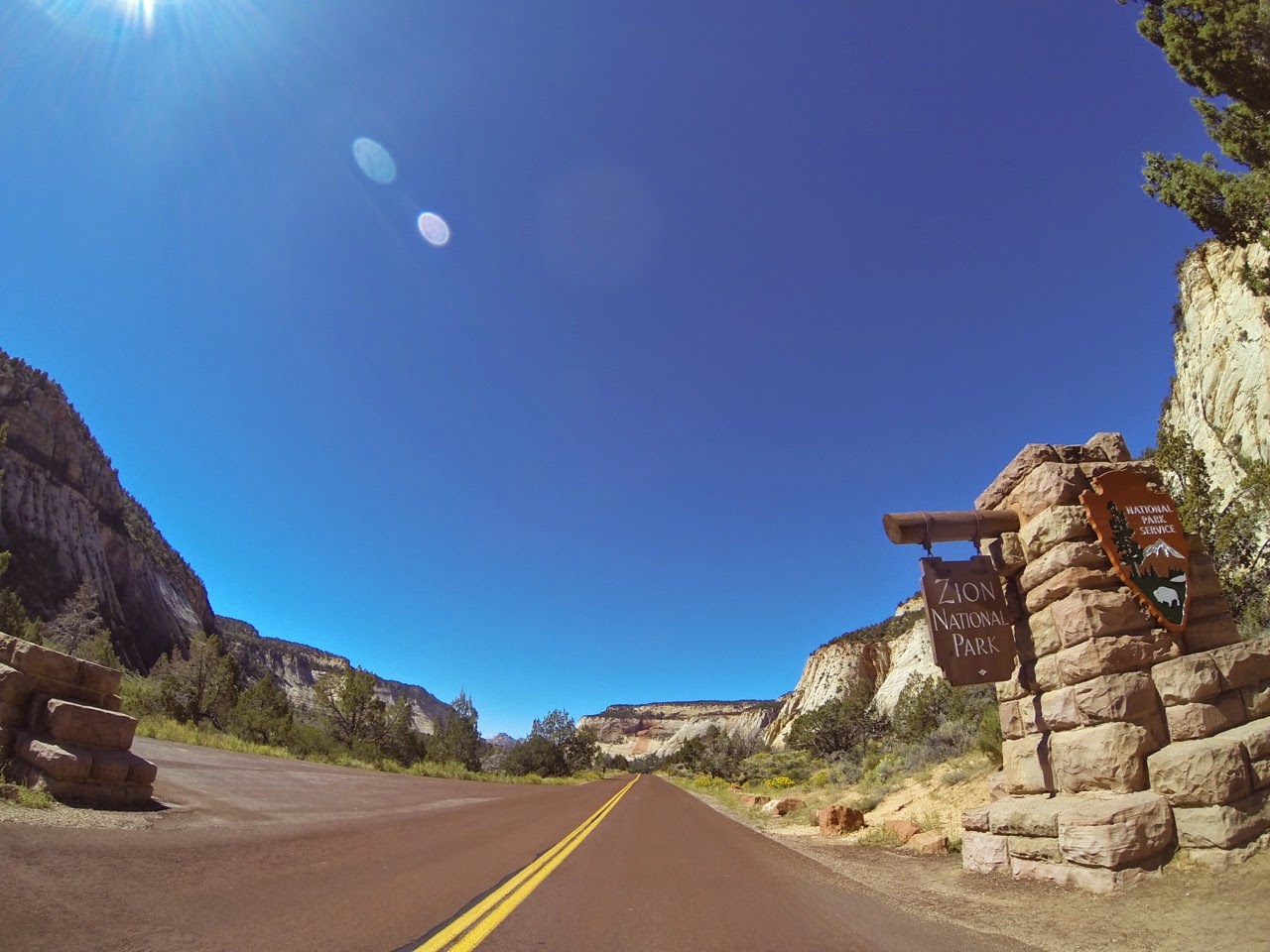 Zion National Park is among my top three in the US.  If you have an opportunity, allow time to go up Zion Canyon Scenic Drive.  One can reach it at the Visitor’s Center.  Consult the Zion National Park website’s shuttle schedule.  If the shuttle is not running, you can ride your motorcycle up this breathtaking road.  Butler Motorcycle Maps rates it a G-1.  If they are running, you’ll need to park at the Visitor’s Center and take the shuttle.  It is worth it.  In the off-season, one can typically go on their bike Monday through Friday except holidays.  Times and days do vary.
Once through Zion National Park, it may start getting a bit dark depending on the time of year.  There are several small towns nearby that one can stay overnight.  A favorite is Panguitch, UT.

To get to Panguitch, continue on Hwy 9 until it dead-ends at Hwy 89.  Make a left and head north.  You’ll travel through some beautiful countryside getting there.
In Panguitch, a room can be secured for around $50/night.  The downtown section is lively with many restaurant options.  It’s difficult not to strike up a friendship with someone nearby.
From Panguitch, It’s time for a day of awesome!  Your Go Pro cameras are charged, and new MicroSD cards have been inserted.
In the morning, head back south on Hwy 89 until you come to Hwy 12.  Hwy 12 is also known as ScenicByway 12.  Head east on Byway 12 You’ll pass the turn-off to Bryce Canyon National Park.  We’ll return here later.
Continue on in a north-easterly direction on Byway 12.  On a map, this may seem boring and uninteresting, but in reality, the opposite is true.  Especially coming from the concrete jungle known as Los Angeles.  The amount of green and the fresh and delightful scents will remind you, constantly, why you ride a motorcycle.
About 20 minutes before the town of Escalante, there is a challenging canyon road.  You may scrape your pegs and certainly any floorboards you may have.
In the town of Escalante is a truly interesting person Mike introduced me to, known only as ‘Desert Doctor’.  He’s a character, to say the least, but he’s also a blessing to many motorcyclists who need a new tire, service or other help with their bikes.  He’s a remarkably competent tech and well worth stopping by and meeting him.  Desert Doctor is located at 120 S Center St.  His number is (435) 826-4951.

From Escalante, continue on through GrandStaircase-Escalante National Monument.  This ride is stunning in its beauty.  You’ll pass a sign for the Kiva Coffee House.  Stop on in for a light lunch.  It’s well worth it.  At this point, you’re probably thinking, “WOW! This is amazing!”  You're right, it is, but wait… There’s more!  Much more.

You’re probably finding the descriptions of these places vague.  This is intentional.  To adequately describe the sights, sound, smells and sensations a motorcyclist would experience along this magical highway would take dozens of pages of text.  Mike would frequently look over at me and simply nod his head.  We both understood how special this place was and how lucky we were to be here. 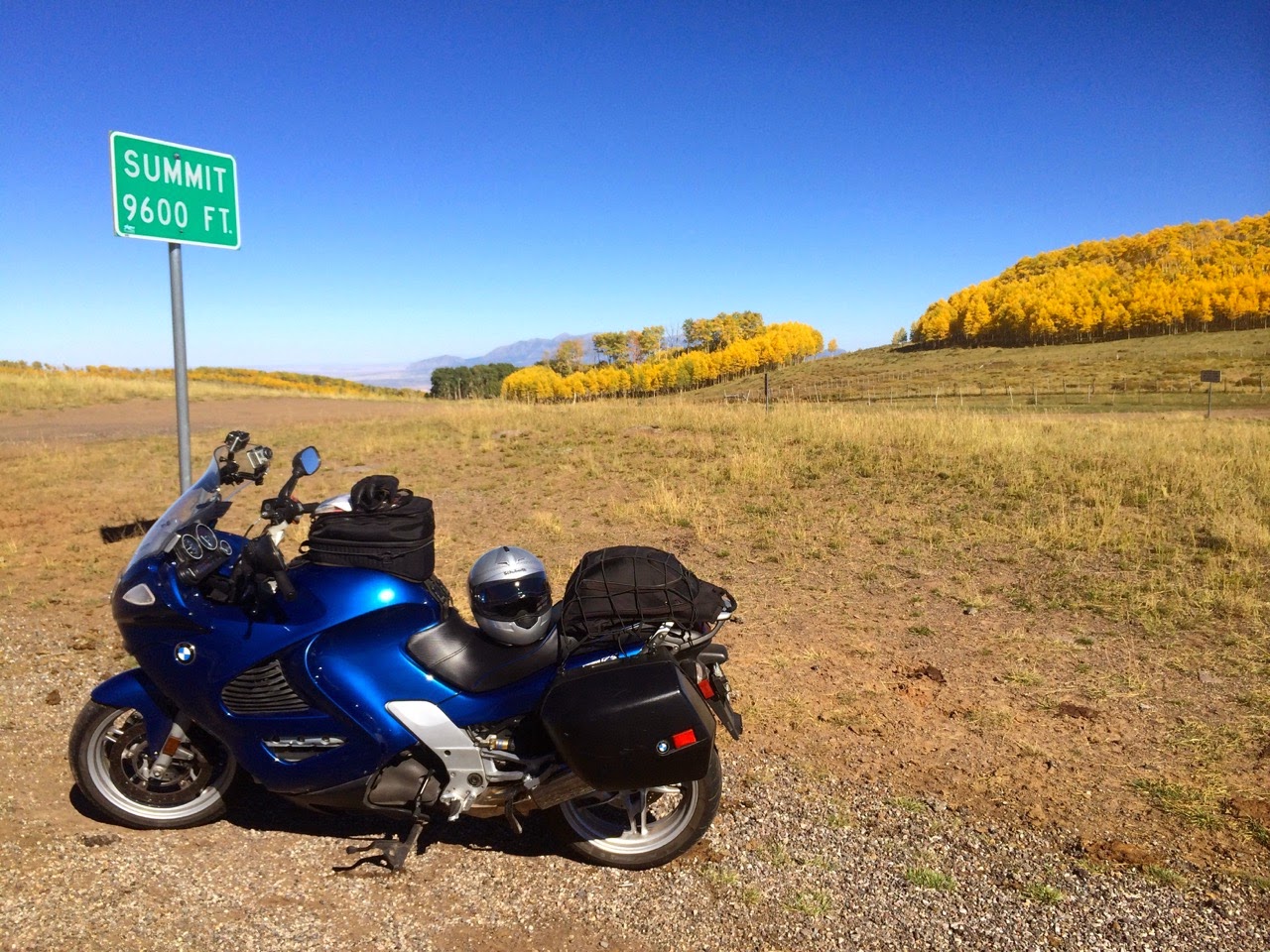 We slalomed up the mountain to the 9600ft level.  As we rode, the leaves were turning to autumn colors.  It was magnificent!
Mike and I traveled through Byway 12 until it ended at Hwy 24 in Torey, Ut.  We naturally went east and through Capitol Reef National Park.  There will be many places you wish to stop and snap a photo throughout the day so, by this time, you may be running out of steam.  You may want to continue on to Hanksville and find a place to stay the night or turn around and stay in Torey.  There’s a valid argument to make for either.
Now the most amazing part!  You get to turn around and head back, more or less, the way you came.  The sights will be quite different as you approach them from the opposite direction.
A lodging suggestion on the way back is to stay in Bryce Canyon National Park or just outside in the town of Tropic.  Do take Hwy 63 into Bryce on the return journey.  It’s also quite mesmerizing.

For the return trip, once you cross the border back into Nevada, consider taking Hwy 169 toward Lake Mead.  It’s much more interesting than the interstate and affords opportunities to see Valley of Fire State Park and LakeMead National Recreation Area.  The Hwy changes designation several times from 169 to 167 (Northshore Road) and eventually 147 (Lake Mead Blvd), which will take you back to Interstate15 just north of the Las Vegas Strip.

Mike and I truly enjoyed this ride.  It’s a fine drive as a road trip with some friends, too.  Of course, like most things, it’s much better on a motorbike.
Special thanks to Irv Seaver BMW Motorcycles in Orange County, CA for this ride blog.