One of the most pleasant surprises that a motorcyclist may expect from their passion is the vast number of amazing friends they gain… and not simply on Facebook.

Interestingly enough, Facebook happened to be the start of a grand friendship that blossomed into camaraderie, mutual interests and even an unbelievable European riding trip.

Several years back Laura Ruddy posted something clever on the BMW MOA (Motorcycle Owners Association) Facebook page.  Through a series of replies, back and forth, a ‘Facebook’ friend request was made and quickly accepted.

Rather than be content as just Facebook friends, a thought-provoking dialogue ensued and a lasting friendship as formed.

That friendship with Laura blossomed while she was here, stateside, and matured during a three-week motorcycle trip in Bavaria and the surrounding countries.

The Eurotrip was capped with a four-day run through the Czech Republic that included Dennis O’Dell and Judith Regn.  Dennis and Judith are a delightful married couple that met later in their lives.  Judith is German while Dennis is an American.  Both thrive in Nuremberg.  A unique characteristic is that Judith rides her own motorbike.  Yes, Dennis considers himself one of the most fortunate and grateful men on Earth.

During that incredible adventure which brought us through some amazing back roads and countryside, Dennis expressed that he and Judith were to come to the US to ride for two months, leisurely, across the country.

This revelation prompted the question to see if they were planning to ride much in SoCal.  Judith expressed they plan to ride Route 66.  Universally, Germans specifically and Europeans generally believe Route 66 is a great road that must be included in any trip to the United States.  While there are fun and interesting portions in Arizona and New Mexico, most of Route 66 has been swallowed up by various interstates.

This was of little concern to Dennis and Judith as they were coming to enjoy the US and share several months of memorable riding.

Initially, Dennis and Judith’s plans for SoCal were to run from Ventura, CA to Barstow, CA, avoiding the Interstates 101, 10 and 15 as much as possible.

Upon hearing this, it was immediately suggested that Angeles Crest Highway (CA-2) is a world-renowned mountain pass that will offer an unforgettable riding experience.  Dennis and Judith agreed that it would be nice and that it would also help keep them off of the interstates.

Several weeks after this enjoyable conversation, Dennis and Judith arrived in San Francisco and purchased two pre-owned Motorbikes to match the ones they rode back home.  Dennis was running a beautiful BMW R 1200 GS Adventure and Judith picked up an identical Street Triple R (with ABS).  The intention is to sell the bikes at the conclusion of their trip.  This way the cost of the bikes would be negligible and quite possibly profitable.  Short of borrowing a friend’s bike, while traveling abroad, this is the best way to ride in a specific country or region for more than two weeks.  If visiting for less than two weeks, it’s probably better to simply rent a motorbike abroad.

As Dennis and Judith traveled south on Pacific Coast Highway (CA-1), arrangements were made to meet at the Shell Station where the 210 Freeway and Angeles Crest Highway meet.  The Shell Station is a popular meeting point for motorcyclists as one can obviously fuel up and hang out for their friends to arrive.  The station is very grateful to motorcyclists and even puts out chairs for those awaiting their friends.

Just as the tank was topped off on my BMW K 1200 RS, Dennis and Judith both arrived to warm smiles, hugs and handshakes.  A brief description of what to expect was also conveyed to the riding pair.

Angeles Crest Highway Is made up of mostly medium sweepers.  Some are a little tighter, but there are no 180º switchbacks.  Rock and pinecone debris may be on the road, beyond the tunnels.  Given it was a midweek day, we largely had the whole road to ourselves.  This is both a delight and an impossibility during the weekends.

Starting in the lead, it was easy to notice right away that Dennis was really enjoying this road.  At our first turnout Judith was asked how she liked it.  Her beaming smile was very contagious.  She exclaimed that she loves this road and was really grateful that this was arranged.

Diving left and right into beautifully cambered and surfaced sweepers, we made our way to Newcomb’s Ranch for lunch.  While there, we each enjoyed talking to Bologna HOG members who rented bikes and were coming down Angeles Crest Highway into Los Angeles.

After lunch we hopped back onto the motorbikes and made our way to Wrightwood.  Stopping for a coffee, we met a couple who just pulled in from Crestline.  Given that is was still early in the afternoon and that we’d have plenty of daylight, I suggested to Dennis and Judith that we could cut and run north to Barstow, CA from there or we could continue to Crestline, Lake Arrowhead and Big Bear Lake.  From there we could take a backroad to Barstow and call it a great day.

The only concern was Judith.  In Europe, the distances between places is much shorter than what we’re accustomed to, in the western US.  This proposed route would become one of Judith’s longest days in the saddle.  She was very supportive and was ready to tackle some more interesting riding so we continued our trek.  Crossing Interstate 15, the terrain changes. The road now brought more variety to the day’s journey.  Coming the back way through Crestline was very exciting.

Completing a lively run was a crescendo that consisted of meeting up with ‘Rim of the World’ Highway on a transition that seems to float in the sky.  At our next break, Judith was simply giddy. She was smiling and bouncing like a schoolgirl who had just been given her first real kiss.  The joy was palpable and we were all very happy to be enjoying this experience.

Quick stops at Lake Arrowhead Village for photos and then Big Bear Lake prompted me to ask both Dennis and Judy if they expected today to be like this.  Both exclaimed that this was among their best day ever, riding.  They went on to predict that it was probably going to be the highlight of their trip.
As the sun was beginning its descent into the horizon, we pulled into Barstow, CA.  Originally, the intent was only a day ride for me.  The lateness of the day and the desire for some cold draft beer, by the three of us, was enough for me to get my own room and stay the night.

Upon checking in, another guest here on a construction job offered advice on nearby dining.  A brief walk down the street put us at Los Domingos Restaurant.  Upon being seated, three ice cold Modelo Negros were placed in front of each of us and we began reflecting on the incredible day. 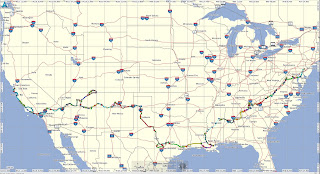 Dennis O’Dell and Judith Regn continue their journey, as of this writing.  Many more destinations have been visited including Grand Canyon National Park and Monument Valley.

Dennis even had to order a couple parts from Irv Seaver BMW to meet him along his journey.

Their friendship along with that of Laura Ruddy and countless more friends is cherished and all because of a motorcycle.

Dennis has a very clever blog detailing many of his journeys including this one.  Enjoy it here .

When you have an opportunity, invite a friend from out of town to ride with you.  It will be a memorable and welcome experience.