Can one mountain road justify a visit to Tucson, Arizona? Yes, it can! 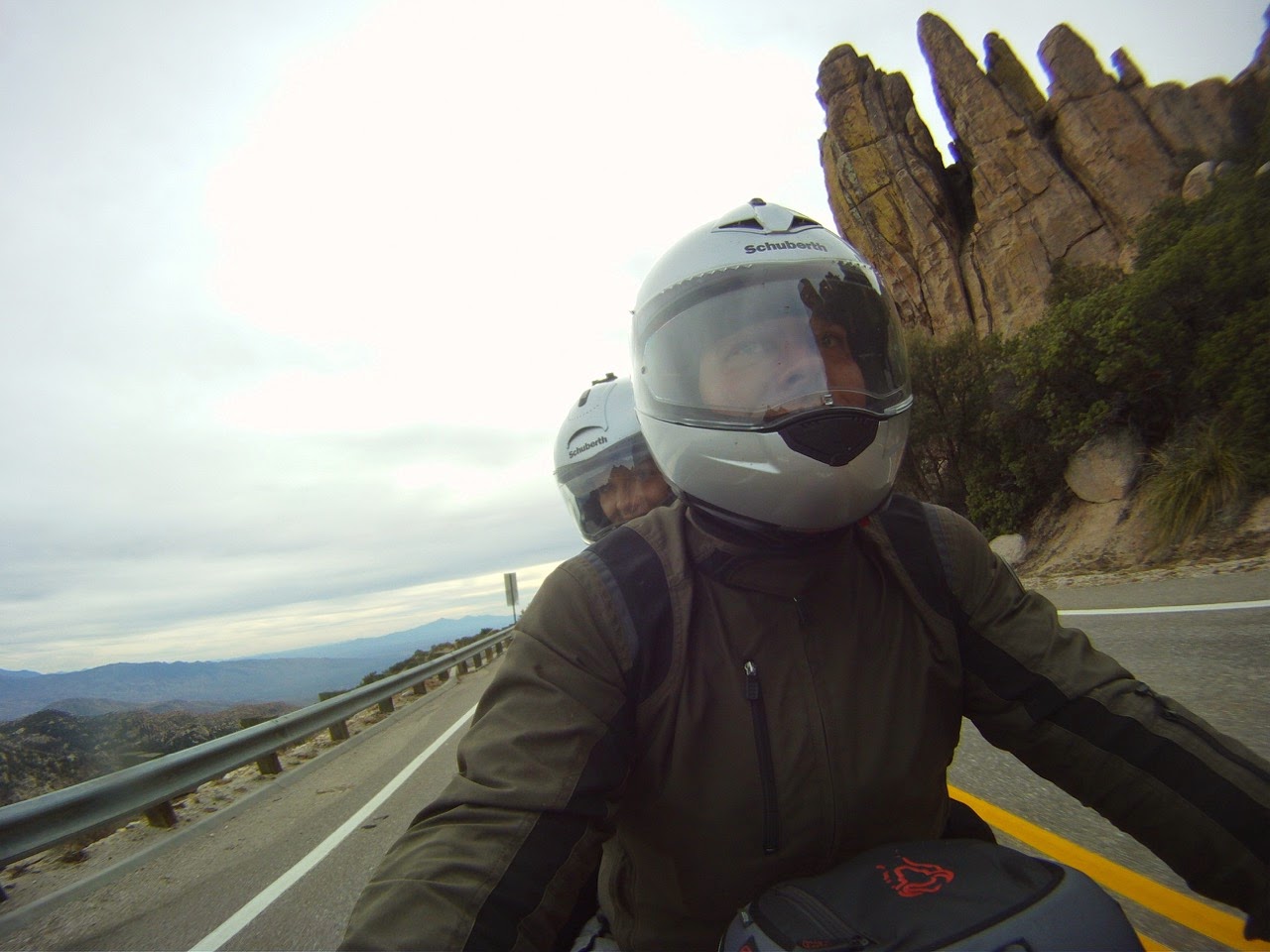 ©2014 Words and Photos by Jim Foreman

Origination:
A good friend and Facebook moderator for the BMW MOA (Motorcycle Owners of America), Laura Ruddy, informed me that she’d be spending some time in Arizona for a family matter.  Before leaving her amazing husband Sean, and son, Ian in Germany, Laura asked, in particular, if she and I could go riding.  To that, the exclamation was an immediate and resounding “YES!”
Arizona has a remarkable number of excellent riding roads throughout the state.  While there are wide swatches of nothingness, there is plenty of amazing awesomeness, too.  So much so that Butler Motorcycle Maps has two maps for Arizona.  The most popular is the Street map followed by the Backcountry Discovery Routes map.
Time was limited.  Many roads called out to us including the magnificent “Devil’s Highway” (US 191) traversing the Coronado Trail through the White Mountains.  Sadly, fortune did not favor the journey, but the road up to Mount Lemmon in northern Tucson, AZ was a ‘Go’.
For those who are familiar with Angeles Crest Highway (CA-2), just north of Los Angeles, Mt. Lemmon is quite similar.  Like ACH, Mt. Lemmon earns the prestigous Butler Motorcycle Maps G-1 rating.  The big difference between ACH and Mt. Lemmon is that the road is much shorter on Mt. Lemmon, but the scenery and elevation (>9000 ft) on Mt. Lemmon is far superior.  A great run is often interrupted with a stop to take some truly amazing photos of rock formations, the mountains, and the valley, below.  Yes, on a clear day you CAN see México.
More so, Mt. Lemmon features similar epic sweepers as ACH and even some excellent dining at the top.  Like ACH, Mt. Lemmon also features several Ski Resorts.  Yes, if you’re wondering, it does snow, a lot, in southern Arizona.
Bottom line… Is it worth a trip just for that?  Hell YES!

Getting There:
Our journey began in Mesa, AZ.  Mesa is a suburb of Phoenix and home to ASU.  From Phoenix, there are two primary ways to get to Tucson.  Interstate-10, a 75MPH super-slab is the easy option.  The other is the back roads that meander through Florence, AZ.  We opted for the slab as during winter; the days are short, and time mattered.  It’s a long a monotonous 100 mile run, so it’s best to break it up into two 50 mile segments with a break in-between.  That way your mind and bum can have a change of scenery.
Along the way, there is an excellent Ghost Town of SASCO, AZ (Southern Arizona Smelting Company).  It’s an easy graded dirt road that most street bikes can easily navigate.  A GS or another dual sport is recommended.  To get there, exit I-10 at Red Rock and make your way to Sasco Road.  Then follow the dirt road for a couple of miles.  You’ll see part of the old town and jail off to the right and further up the giant smelter and associated foundations and structures.  Just past the main site is the old cemetery.
Continuing to Mt. Lemmon, one would exit at Grant Avenue.  Though several streets can take you there, Grant is not only the easiest, but also home to Iron Horse BMW Motorcycles.  Iron Horse is a very good dealer and a great place to stop in and top off your water bottles and use the restroom. Iron Horse BMW also has many last-minute items you may have forgotten or needed replacing.
Continuing east on Grant Avenue, make a left at Tanque Verde.  This intersection is known for the ‘Dinosaur McDonalds.’
Take Tanque Verde east and veer left at the split and continue until you reach Catalina Highway.  It’s a large intersection.  Make a left.  From there, follow it up to the base of Mount Lemmon.

Mt. Lemmon:
At the base of Mt. Lemmon, Laura later recounted that she wasn’t terribly impressed.  Yes, it is pretty with all the Saguaro Cactus but she remained decidedly underwhelmed.
We passed by a sign indicating this as the “Sky Island Scenic Byway” and accelerated in earnest.
Laura’s doubts vanished after the first sweeper.  It was a beautiful right hand 180º peg scraper.  From that point to the top, a smile was ever present on her face.  Mine too, for that matter.  Corner after corner made for an exhilarating run.  The further up the mountain we rode, the more spectacular the scenery and formations.  The Saguaro Cactus gives way to Juniper Pines, while the crisp mountain air recharges the soul.
throughout it's duration, this road simply does not let up.  Well surfaced, nicely cambered, roadway perfection greets the rider, mile after mile.
At the top, is an alpine village called, curiously enough, Mt. Lemmon.  Upon arrival, Laura jumped off the back of the bike and began cheering and hoppin' around!  At first, I though she had a medical emergency, but it quickly became evident that she was doing a ‘spike-the-ball’ victory dance.  This roadway has that effect on people.
The Town of Mt. Lemmon offers three dining options.  The first is the Sawmill Run.  It’s the large café on your left, next to the post office.  Just about 250m past the Sawmill Run is the Mt. Lemmon Cookie Cabin.  They serve great sandwiches, desserts and of course, cookies.  Also, just before entering town there is the Iron Door restaurant at the base of the ski lodge that serves great food.
Lunch for us was at the post-office recommended Cookie Cabin as Sawmill Run was closed for renovation.
It was during lunch we met a delightful couple, Jim and Doris Mulvaney of Columbus, OH.  I had expressed that I had been to Columbus and liked the town, very much.  Jim and Doris were traveling and enjoying the beautiful winter warmth of southern Arizona.
Jim had mentioned how much fun he thought it was to take this road on a motorbike.
From the top of Mount Lemmon, one may descend the back way, down the mountain, to the town of Oracle, AZ.  The road is a graded dirt fire road.  Yes, you can probably make it on a street bike if it hasn't been raining or snowing recently.  Like SASCO, it's best on a GS or another Dual-Sport.
After Lunch, we got back on the trusty steed and made our way back down the mountain.  This time, we stopped, at several locations, to snap some photos.

Riding Advice:
Drivers on Mt. Lemmon are typically quite good about using turnouts to allow others to pass.  If you do pass a slower vehicle, a kind ‘Thank You’ wave goes a long way, as you’ll probably see them at the top or in one of the many vista points.
Weekends do draw a lot of visitors.  The roadway can be quite crowded, especially during the summer, when temperatures are much cooler, at the top. During the weekends, the local Sheriff is usually at the top.  Often he is simply warning motorists to slow down, but occasionally one will earn his need to issue a citation.  During the week, you pretty much have the entire road to yourself.  Mobile coverage is limited so bringing a Delorme InReach, or another satellite communicator is a wise choice.

Final Thoughts:
After a couple of photo stops, we reached the base of the mountain.  I pulled the bike over and looked back at Laura and simply said, “Wanna do that again?”  Her one-word response was cheerfully, “Really?”  I smiled, turned the bike around and opened the throttle.

Special thanks to Irv Seaver BMW of Orange County, CA for sponsoring these amazing rides.  When in Orange County, do stop in to say, “HI!” and enjoy one of the best and largest selections of new and pre-owned BMW Motorcycles in the country.  Please mention that you like these stories.