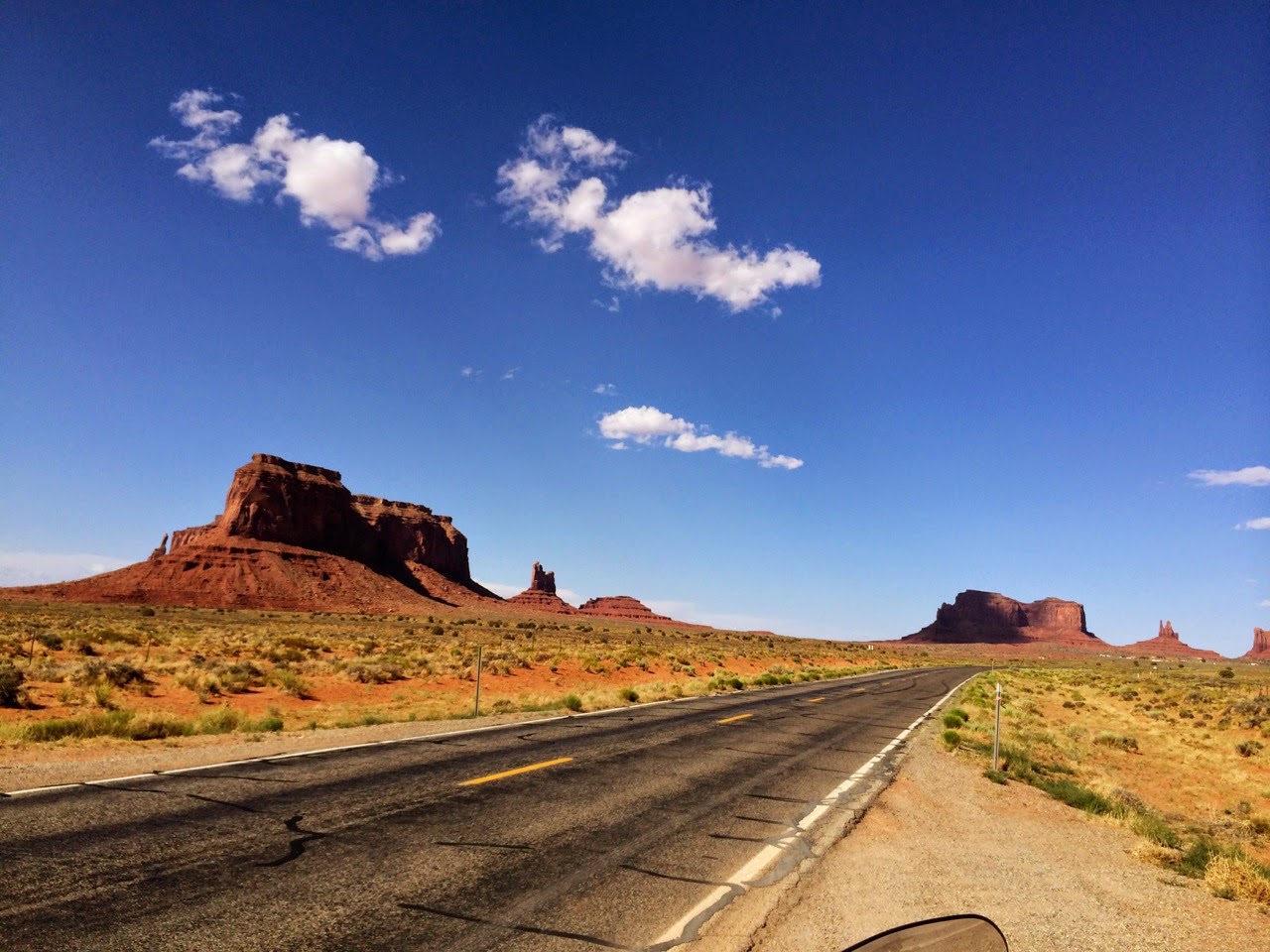 I think it's time for a little overnight trip.
Words and Photos ©2014 Jim Foreman 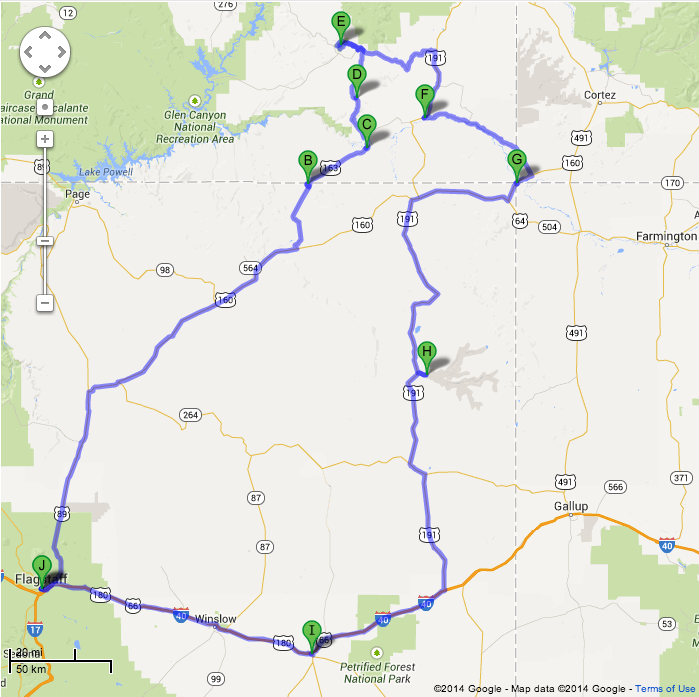 Flagstaff, Arizona
Flagstaff is the definite start and stopping point for a run through the southwest.  The route taken could have been easily modified to include Grand Canyon, Vermillion Cliffs, Horseshoe Bend near Page, AZ, Antelope Canyon, Zion National Park, Bryce Canyon National Park, Grand Staircase-Escalante National Monument and much more.  All of these sites are well worth the trip and should be visited.  For this trip, one overnight hotel stay was all there was time for.  The goal was to visit Monument Valley, Four Corners Monument and Canyon De Chelly. 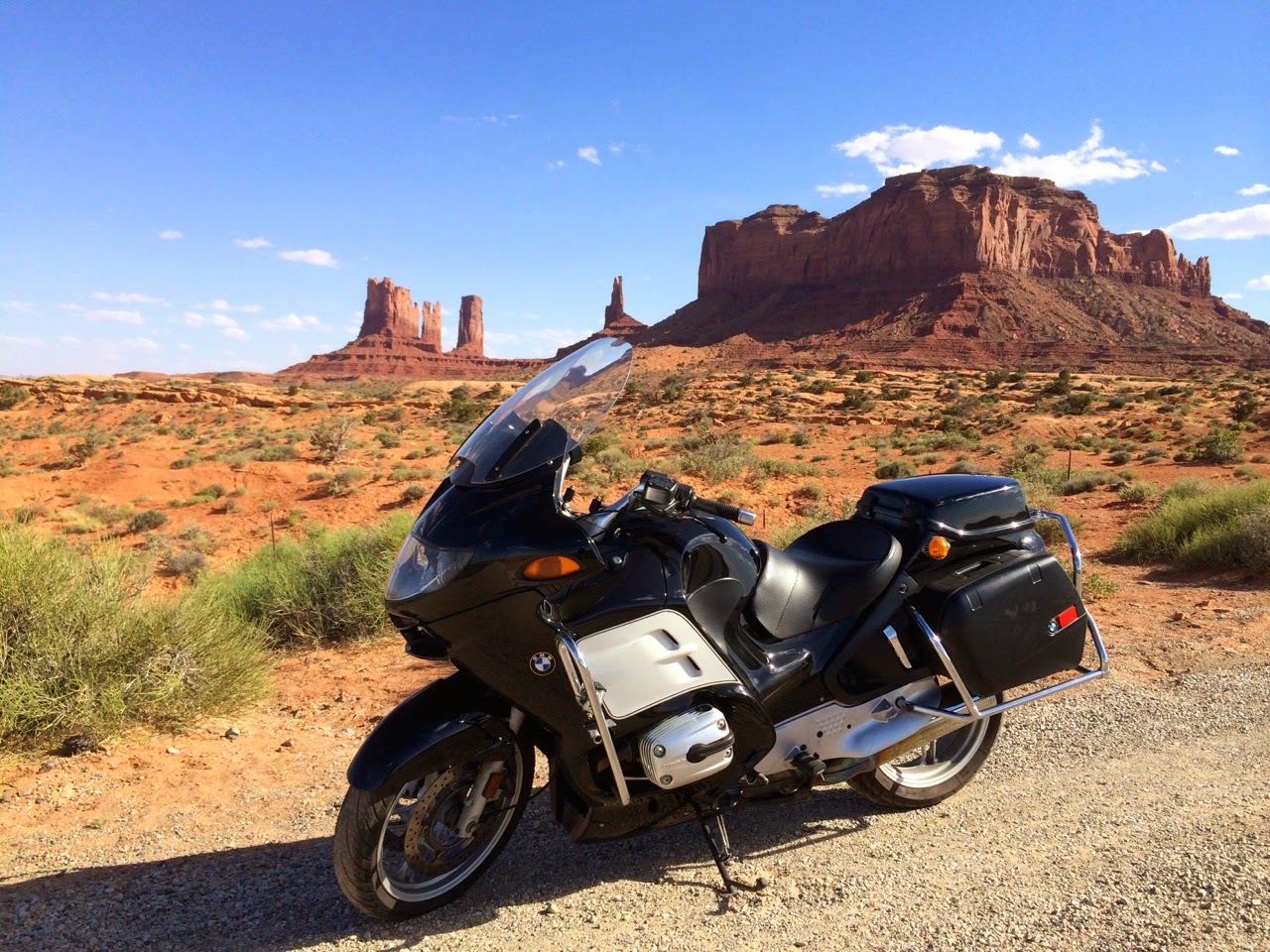 The first major destination was Monument Valley.  To get here from Flagstaff, take Hwy 89 north to the 160 East toward Tuba City.  From the 160, Get gas and head north on the 163 at Kayenta toward Monument Valley.  Hwy 160, between Tuba City and Kayenta, will have you wondering if you were transported to the surface of Mars.  The terrain matches the images returned from the rovers on the red planet's surface.  Monument Valley straddles the Arizona and Utah Border.  Unlike Sedona, in Monument Valley, the formations are spread apart.  It gives an eerie and awe-inspiring perspective to the beauty and how on earth these formations originated.
Monument Valley has been used in numerous movies and television shows.  Most recently it was used in "Breaking Bad" and "Disney's The Lone Ranger."

Monument Valley was also featured in 1968's "Easy Rider," "2001: A Space Odyssey" and "Back to the Future III."  Legendary director John Ford used Monument Valley as a backdrop for countless films including some John Wayne classics, "Stagecoach," "The Searchers" and "She Wore a Yellow Ribbon".  John Ford also directed Henry Fonda as Wyatt Earp in "My Darling Clementine."  "Forrest Gump" and "National Lampoon's Vacation" also had memorable scenes shot here.

In addition to the numerous movies set here, Monument Valley is a source of profound beauty and inspiration.  Let yourself connect with nature and let it speak to you while you are here.
As you continue north on Hwy 163, turn around and you'll see the iconic stretch of road used in so many pictures and movies leading up to Monument Valley. 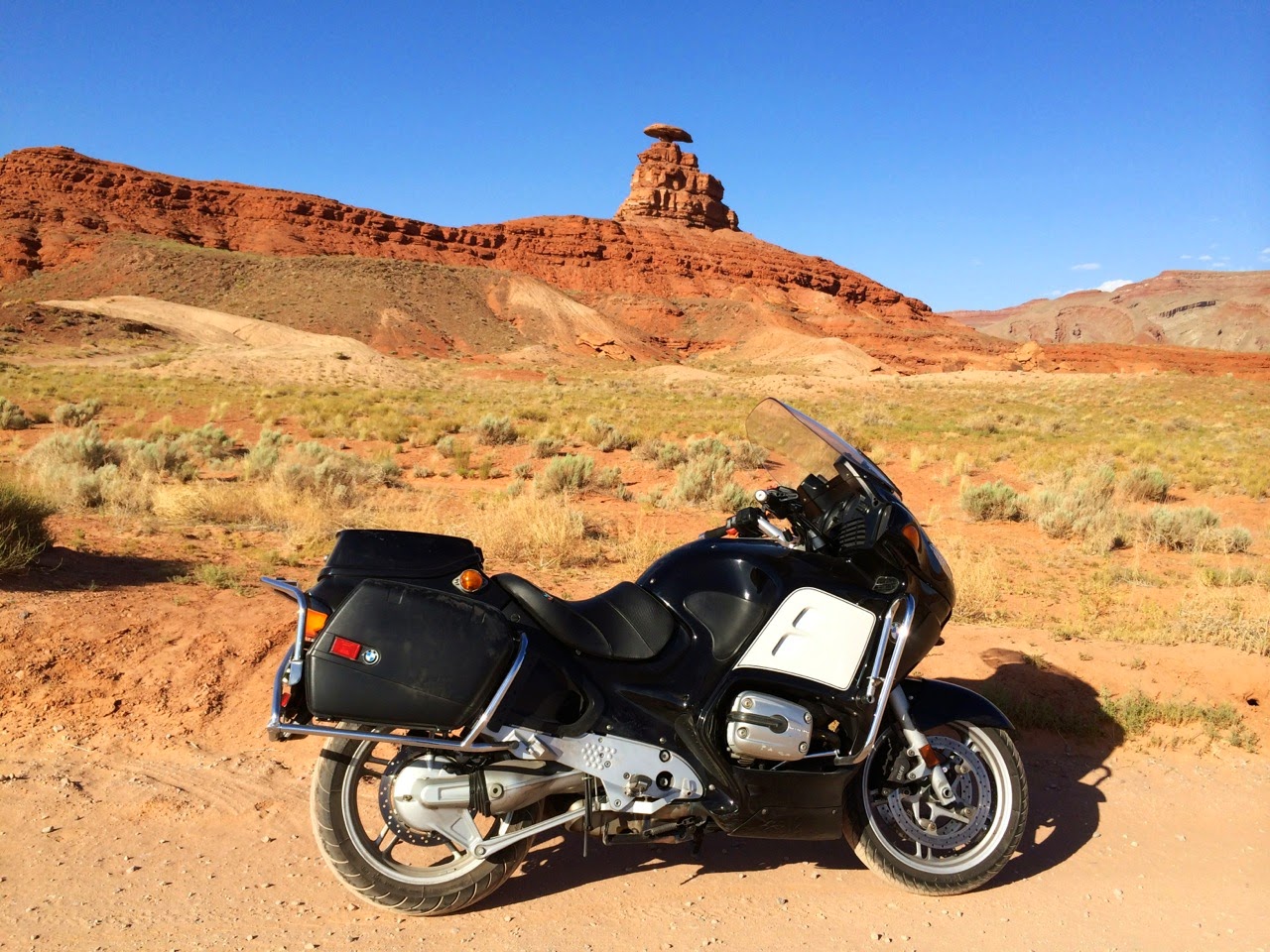 Mexican Hat is a small town along the San Juan River.  Nearby is the namesake's formation which certainly looks like an upside-down sombrero.  It's worth taking the hard-packed dirt road that leads to the formation for a close-up view.  It's only two minutes out of your way and very easy.  Mexican Hat is also one of the few nearby towns one can find lodging. 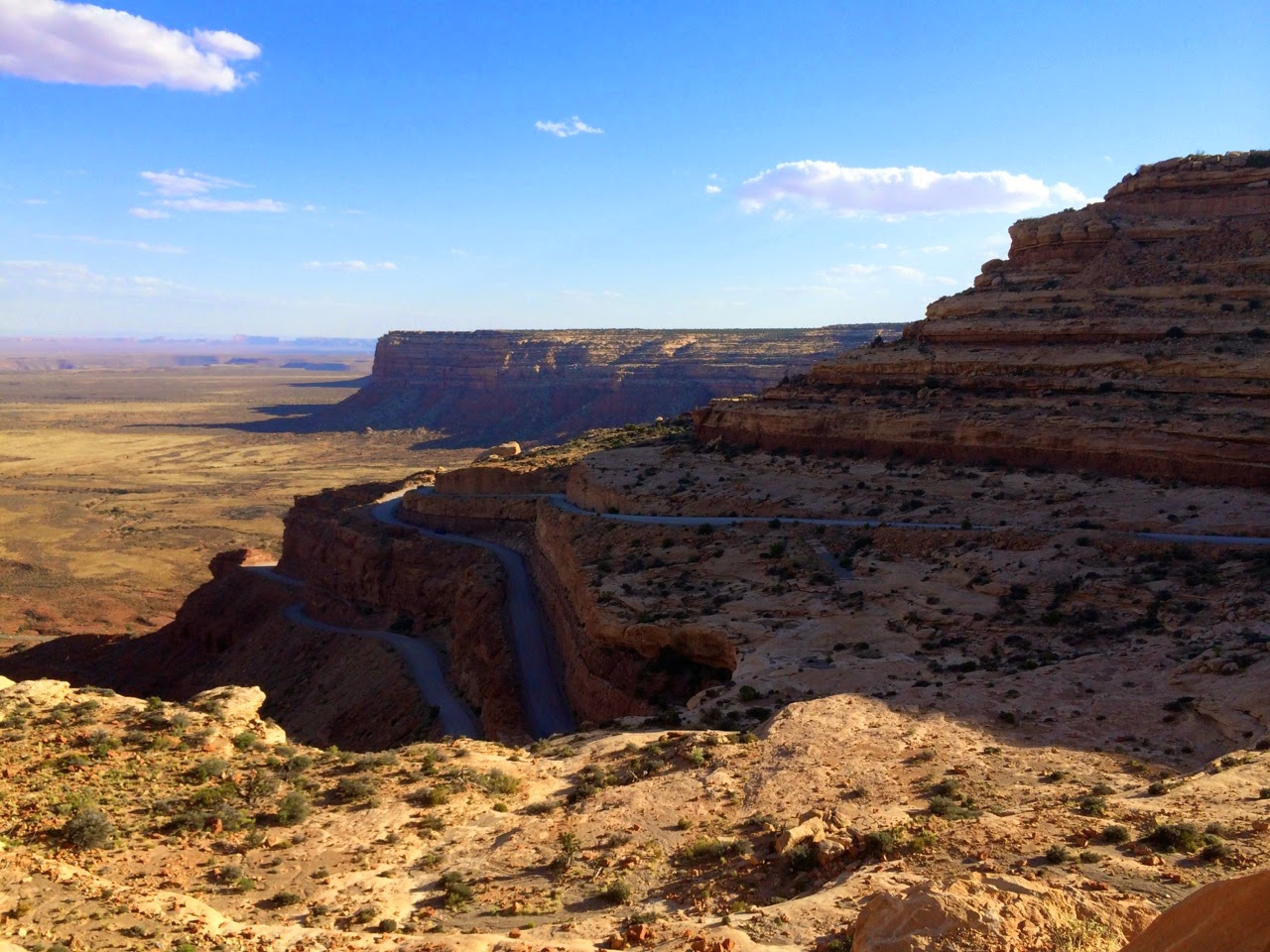 From Mexican Hat, continue on the 163 Westbound until you reach the 261.  From here, you will reach the Moki Dugway.  Two interesting and worthwhile trips off of the 261 are Goosenecks State Park and the Valley of the Gods Road.  Valley of the Gods Road is a dirt road.  As you approach the sheer cliff face, it's easy to wonder in amazement how you would get to the top.  Moki Dugway is mostly hard-packed dirt and gravel.  Any motorbike can easily navigate it in dry weather.  Just mind the shoulder in the straightaways, as it is often soft sand.  Each switchback offers spectacular views.  Don't put your camera away.  You'll be often stopping to take magnificent pictures. 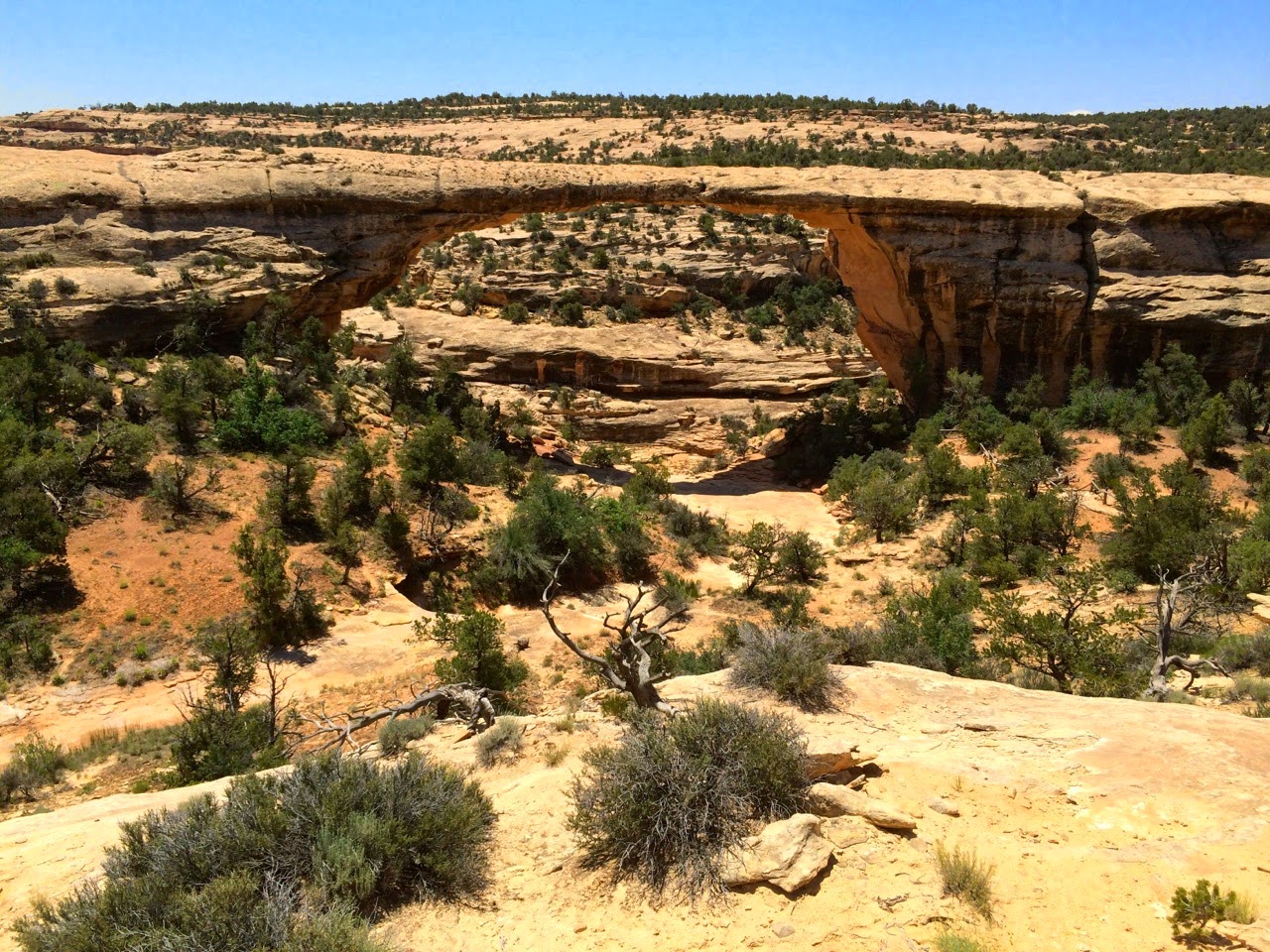 Natural Bridges National Monument is really close to the end of Hwy 261.  At the T- Intersection, at the end of the road, head left or west on Hwy 95 and the indicated turn off will be about half a mile away.  If you're into camping, this is a great place to make reservations for campsites. This park consists of three natural bridges, some Native American ruins and a Pygmy Forest.  All of this is connected by a nine-mile loop of paved road with easy access parking and turnouts.  Each of the bridges has well laid out hiking trails leading up to the bases.  The longest ones are about a half hour each way with about 200m elevation changes.  A telephoto lens will come in very handy at this site. 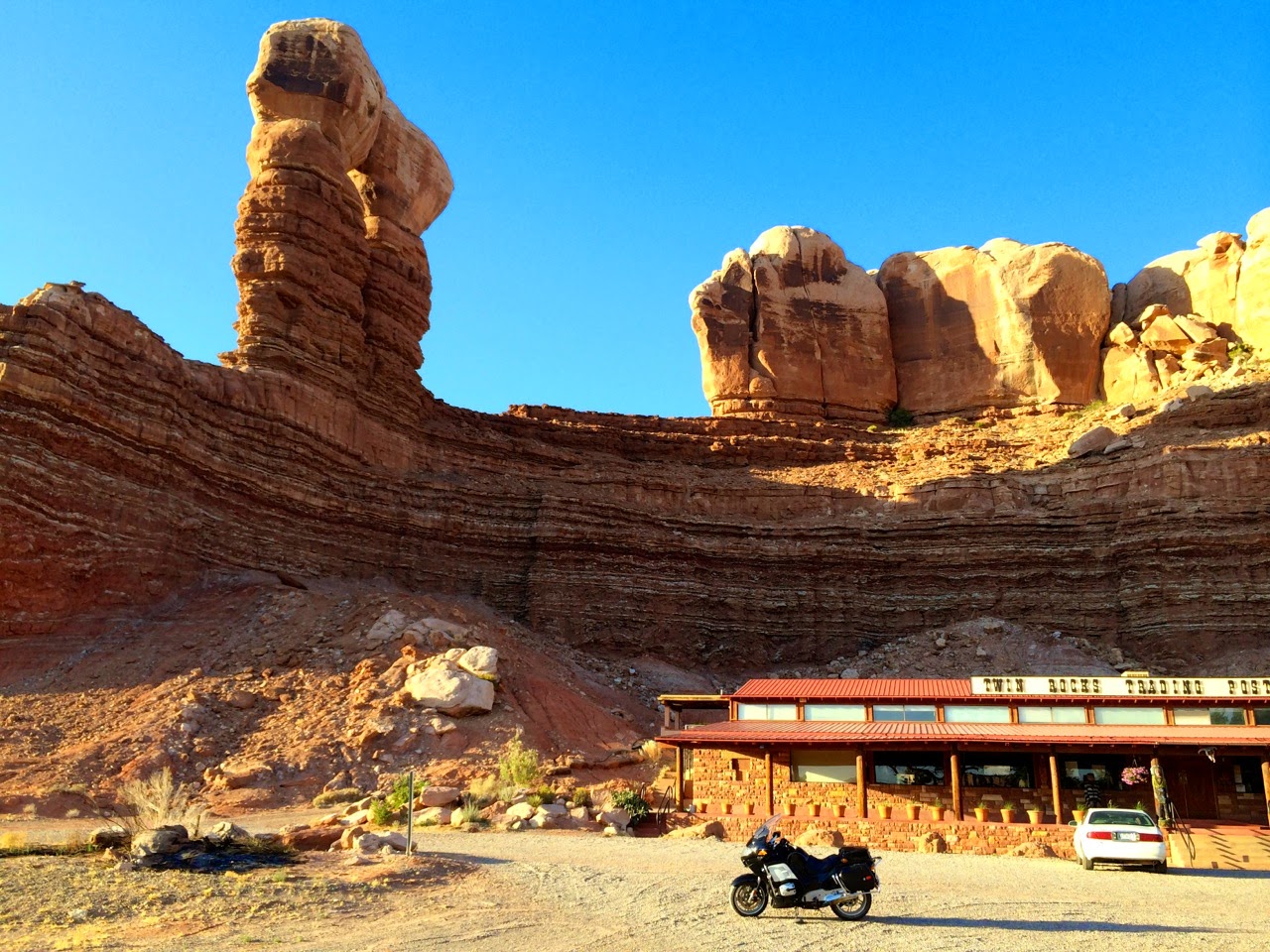 Bluff is a historic town that offers good lodging, great food and very attractive locations and scenery.  Bluff originated as a Mormon settlement and played a key role in the expansion of the west in addition to developing relationships between less-than-friendly Native Americans.  Fort Bluff is a great place to visit and spend a few moments.  The interpreters are quite knowledgeable and friendly.  If a meal is in order, you have a couple of options.  Many of the towns and counties in Utah are dry.  This means they don't serve or sell alcohol.  Nearby Blanding is one such town.  If you're done riding for the day, and you don't mind a glass of excellent locally-brewed cold beer or wine, head to the Cottonwood Steakhouse.  The food is delicious and they feature both indoor and outdoor seating.  Near the east end of town is also the Twin Rocks Cafe.  Lodging ranges from $55 to $190 a night.  Recapture Lodge is a 'best bet' offering comfort, price, location and amenities.  Reservations are highly recommended in Bluff. 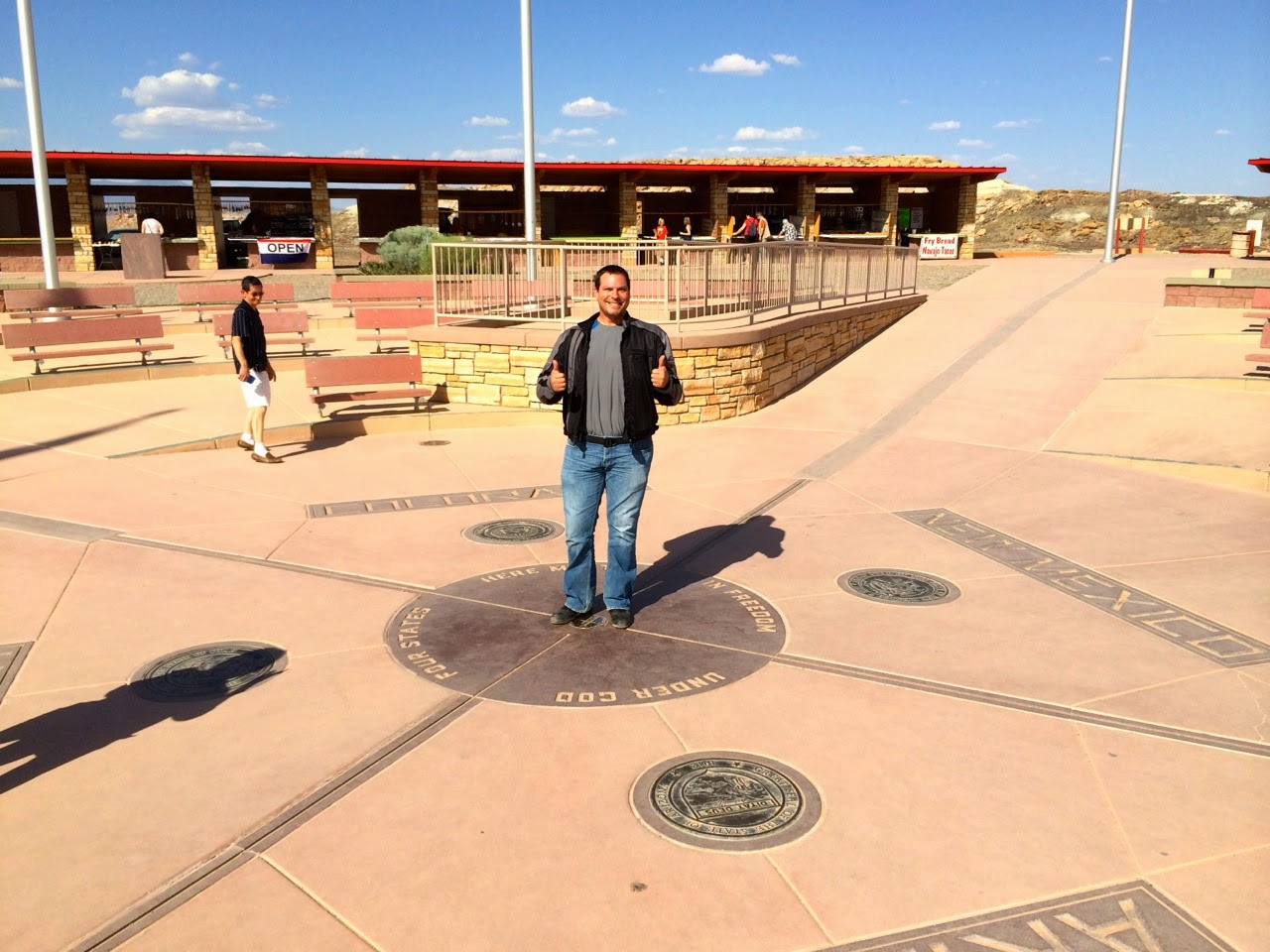 From Bluff, head east (right) on Mission Road (Hwy 162) to get to Four Corners Monument.  At the Colorado Border, the 162 becomes Hwy 41.  Continue on until you reach Hwy 160 and head west or Right.  Admission is $5.00 per person.  Cash only.  If you don't have cash, you will need to go five miles to the town of Teec Nos Pos for an ATM.  Light food, restrooms and Native American artwork and jewelry are available.  Here you will find the surveyed marker point indicating where Colorado, New Mexico, Arizona and Utah all meet.  This is the only place in the US where four states meet at one point.  This one is well worth a visit and is quite reasonable in cost. 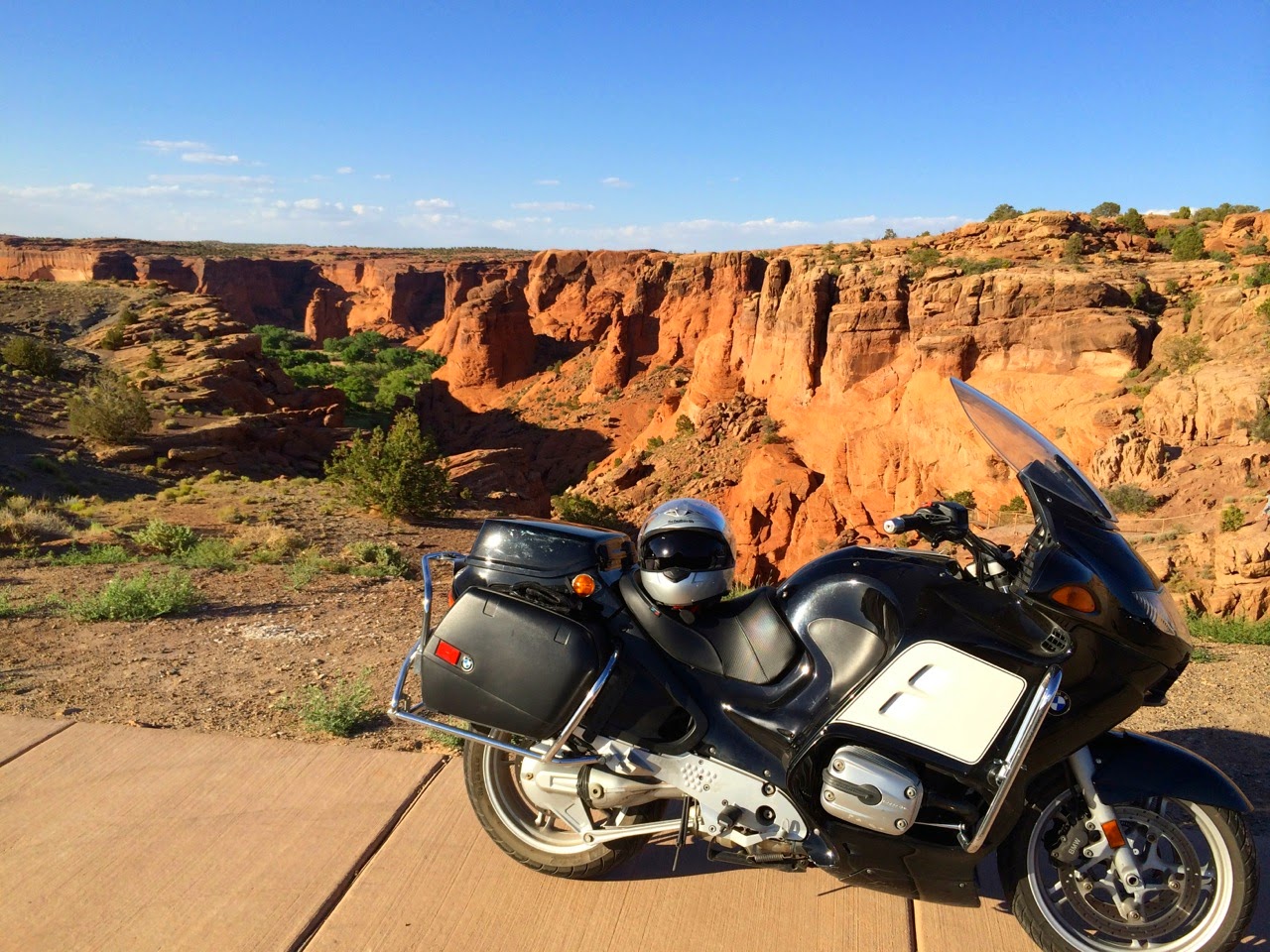 From Four Corners, head south on Hwy 160 until you reach Teec Nos Pos and make a right.  Continue west on Hwy 160 until you reach Hwy 191 South.  North comes first, but you want to head south.  The road south will tease you with beautiful formations such as Point Rock and quiet and easy elevation changes.  Occasional wheelie bumps keep a rider from getting too complacent.  In the town of Chinle, look for the sign indicating Canyon De Chelly.  There is fuel, lodging and some very good restaurants.  The Visitors Center at Canyon De Chelly closes at 5pm, but one can follow the road to the north and south rim of the canyon without stopping at the Visitors Center.  If it's open, please do stop by.  There are many interesting displays and helpful rangers to offer advice and recommendations.  Campsites are also available.  Canyon De Chelly is spectacular!  It's not particularly deep, but the natural beauty, formations and colors will take your breath away.  This spot really deserves at least half to a full day to truly feel one has experienced it.  Hiking trails are abundant and each offers a unique perspective.  When you're ready to continue, ride back and southbound on Hwy 191 until you reach Interstate 40.  Then go West.

Nearly everyone knows the line from the song "Route 66"... "Get your kicks on Route 66!"  Back in the day, Route 66 was a major east-west corridor in the US.  Many small towns were built around catering to travelers with kitschy cafes, attractions and gift shops.  Alas, with Interstate 40's construction, much of the original Route 66 towns were bypassed.   Since Interstate 40 actually utilized some of Route 66, some of the towns retain their charm and glory while others have been left to rot and crumble.  In Arizona, in particular, Route 66 is alive and well.  From east to west towns of Holbrook, Winslow, Winona, Flagstaff, Williams, Seligman, Peach Springs, Hackberry, Kingman and Oatman retain much of their charm. Other towns such as Twin Arrows, Two Guns and others are right off the interstate and can be explored, in ruin.  Two Guns, in particular, has a rich and historical past that can be easily explored and is well worth a stop. One can easily explore the Apache Death Caves.  Just bring a flashlight. 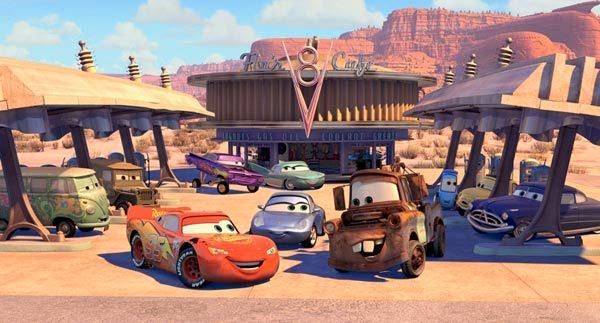 Route 66 was featured in many movies including "Easy Rider," "Thelma and Louise" and "Little Miss Sunshine."  The 'Mother Road' was also lovingly depicted in the Pixar film, "Cars."  In the film, the fictional town of Radiator Springs borrows faithfully and re-imagines many Route 66 landmarks.  One such landmark is the 'Cozy Cone Motel' which is an inspired reproduction of the Wigwam Motel in Holbrook, Arizona.  Yes, you can stay in a Wigwam for around $65 a night. 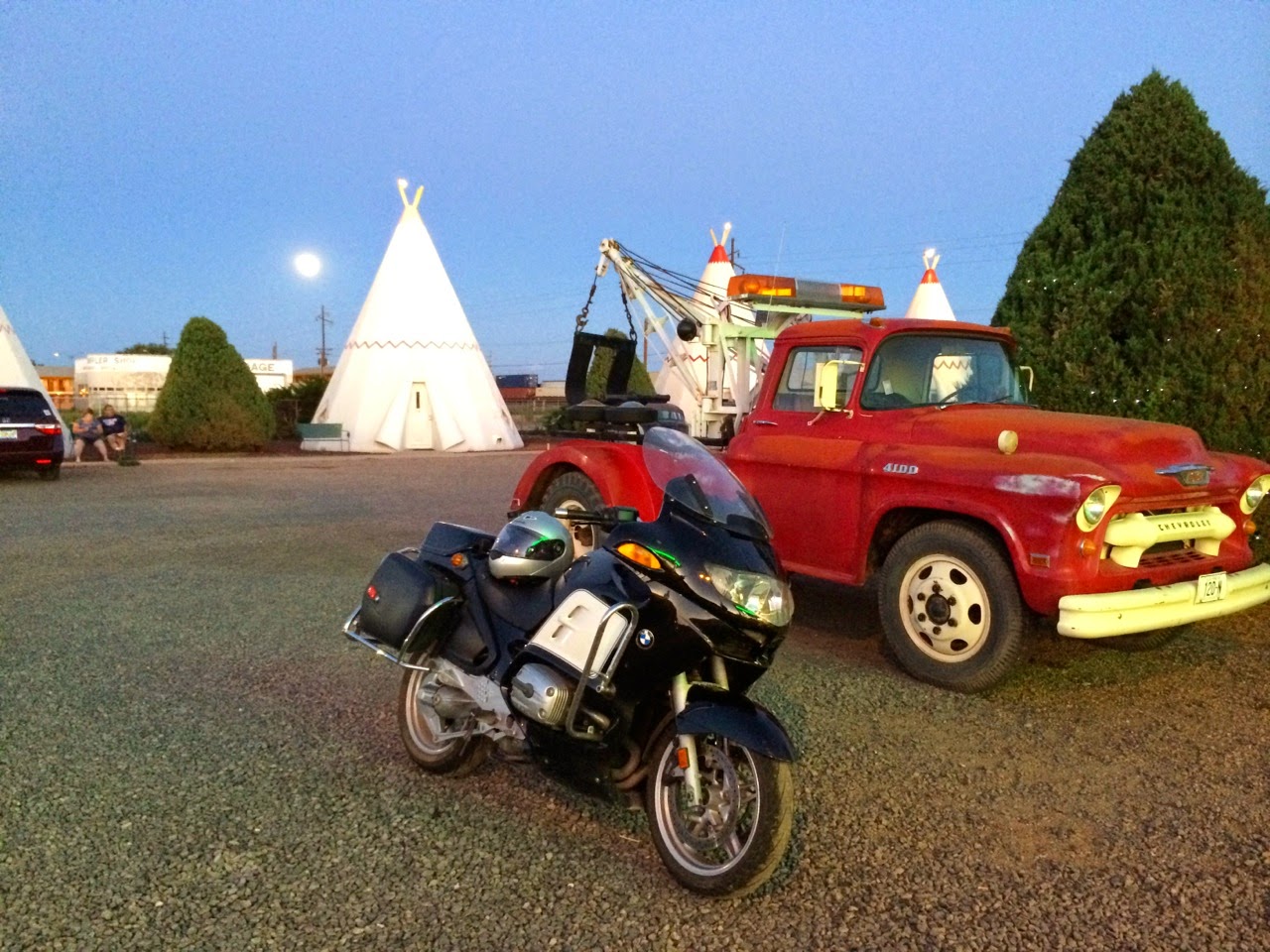 Since the release of "Cars", The Wigwam has acquired many of the original cars used to create the characters in the movie.  A red Chevy tow-truck which became 'Mater, along with many other classic cars, are on display.  This is a textbook example of reality inspiring art which inspired reality.
Flagstaff, AZ

Interstate 40 is a 75MPH highway that will quickly get you where you want to go.  Be mindful that DPS Arizona Highway Patrol does aggressively monitor and issues citations for speeding so keep it below 84, if you want to avoid paying the Arizona Luxury Tax.

Flagstaff is a great town with a rich historic district and lots of dining, drinking and lodging options.  'Flag', as it's called by locals, is an ideal base to explore this rich and majestic region of the southwest.  While in Flagstaff, be sure to enjoy a meal at Granny's Closet.  Look for the statue of a lumberjack and a tractor.  The pair also makes a cameo appearance in the film "Easy Rider."
Please be sure to 'Like' Irv Seaver BMW on Facebook.